Remember I told you about a neat knit-a-long that I joined? I'm talking about the: 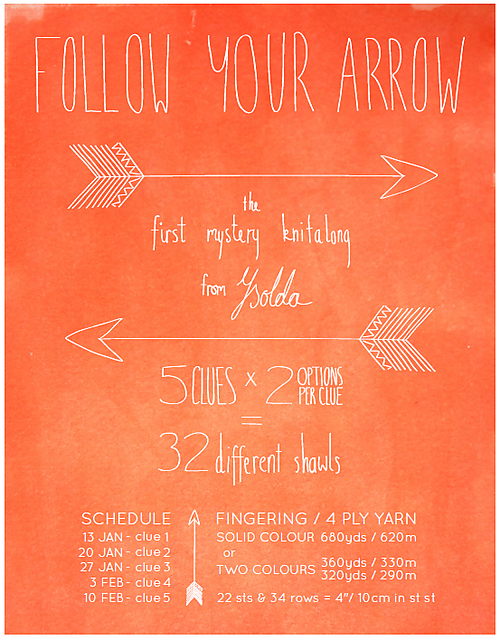 The mystery, knit-a-long was supposed to be for five weeks - we were sent one clue that included 2 choices (A or B) each week. Well, initially I was going strong and for weeks 1-4, I was right there knitting away and this post was a sort of "diary" that I kept adding to as I knit along. However (as you probably have and will notice) I sort of fizzled at week 5. So here's my account of my experience - week by week, clue by clue... until that week 5.

Week 1: 1B - I chose clue 1B although after seeing other A's I really, really thought about ripping back to start over with A. But I stuck out and I'm glad I did.Clue A looked like an isosceles triangle, kind-of? It was different and I think that if I ever decide to make another of this shawl I'll pick A! 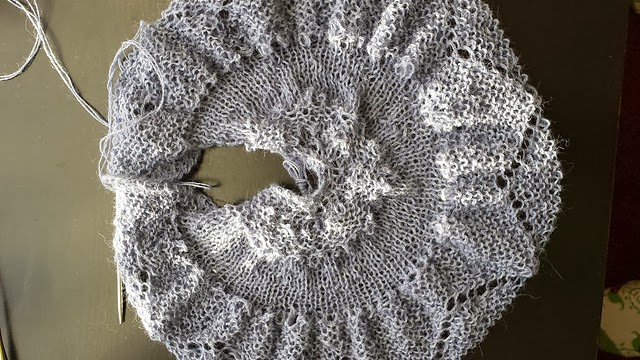 Week 2: 2A - After realizing that I have cobweb yarn (?!?!) I realized I should probably do more open-type stitch patterns. So it was a no-brainer that I chose A.This week's clue was nice an repetitive, perfect for completing while watching football on Sunday. 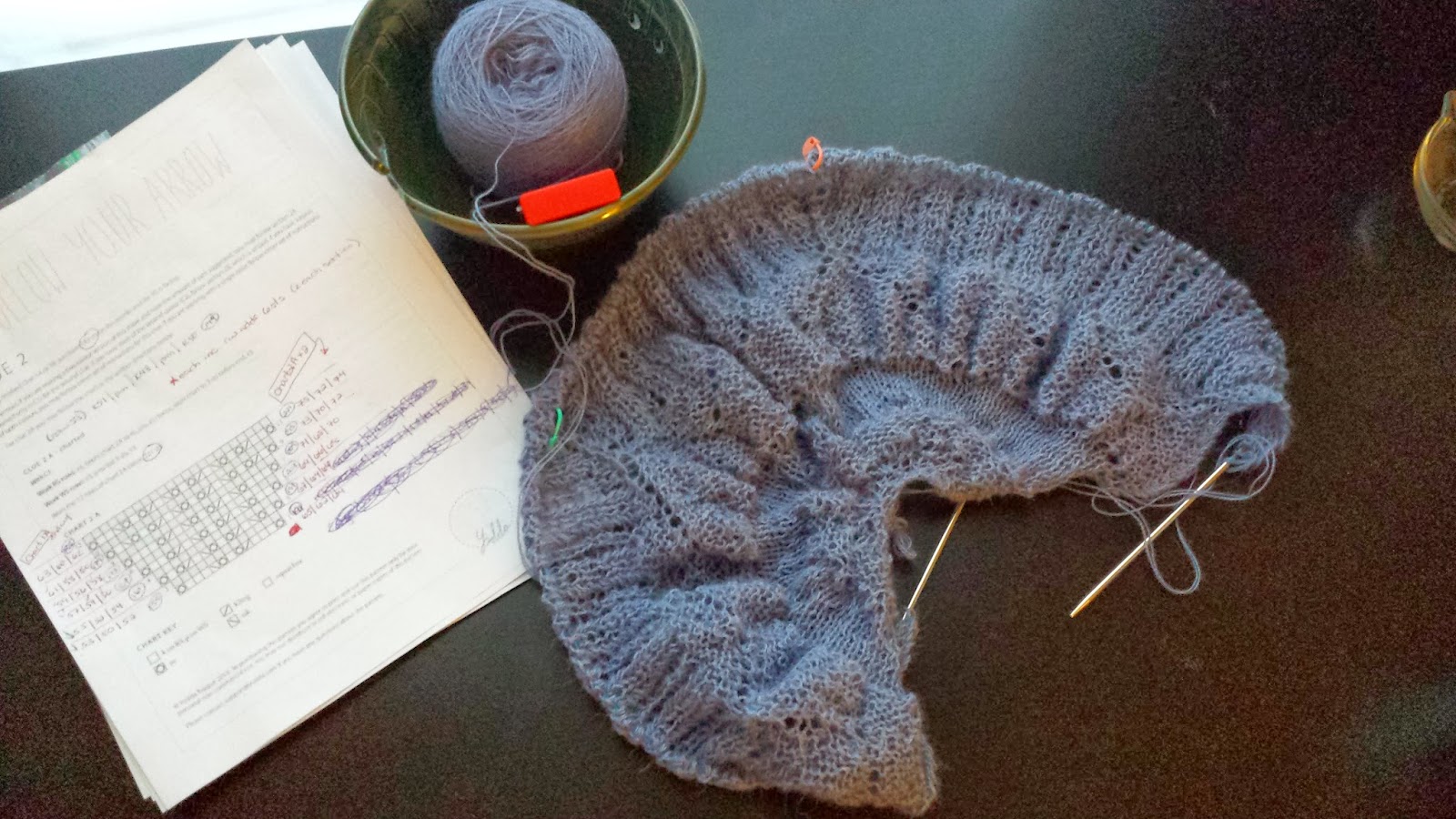 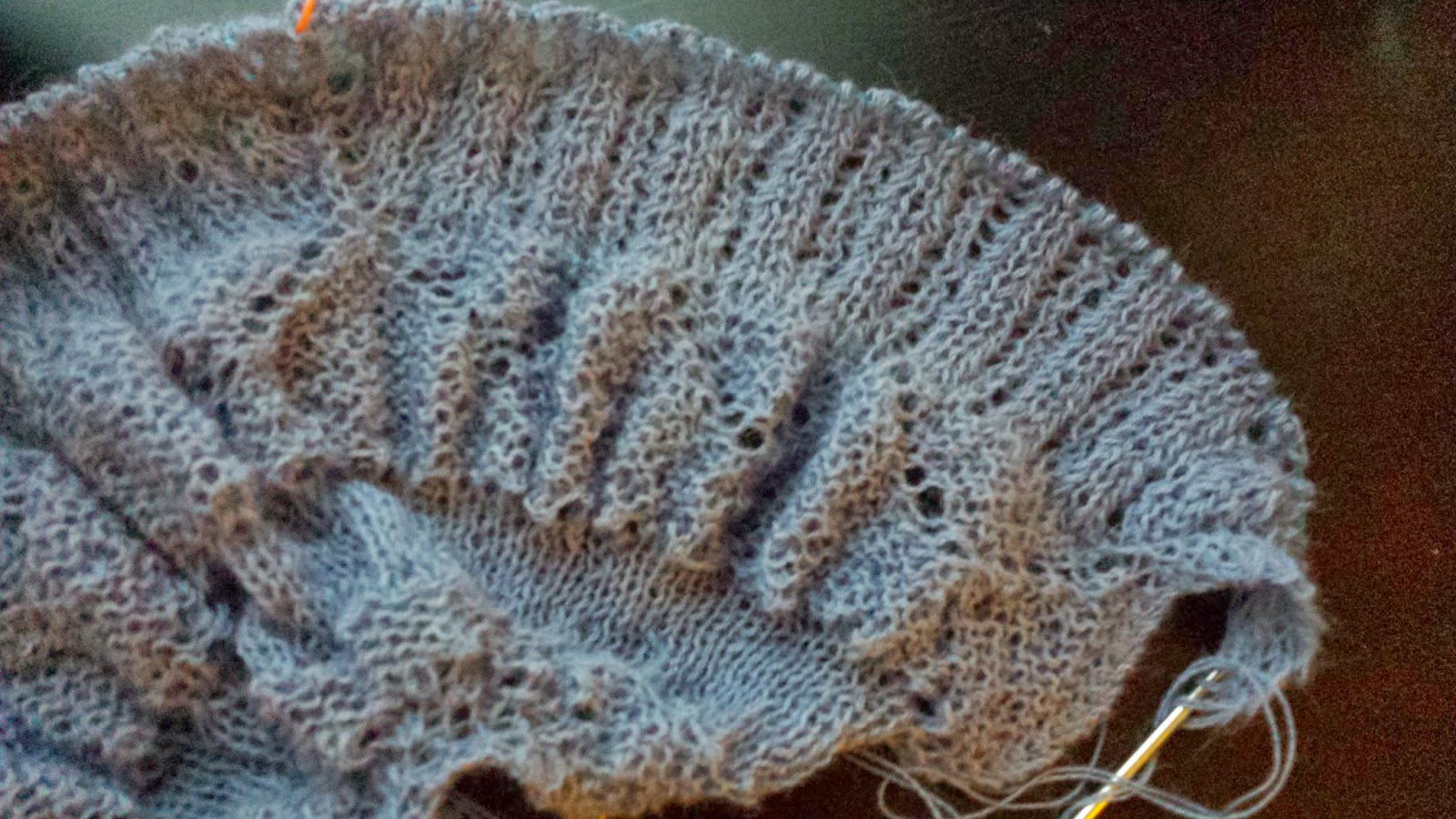 Week 3: 3B - This week started great and I actually finished early! Typically start the clue on Sunday (clues are released on Mondays) and frantically try to finish and converse with peeps before the next release. 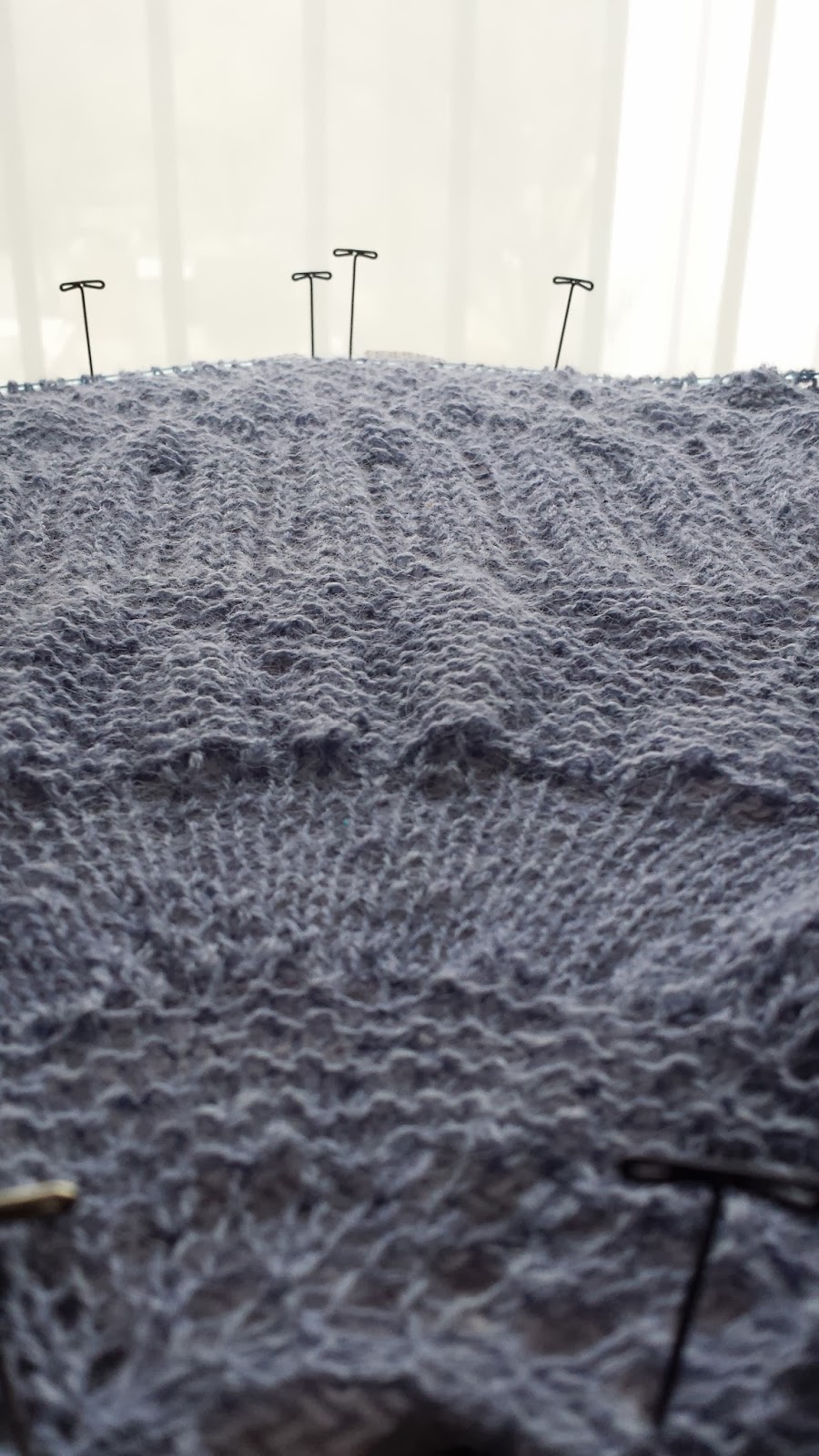 Week 3 Update (later in the same week) - As I looked at my shawl and looked at the pretty 3B chart I realized I wanted to do more! SO I ended up knitting not a second... 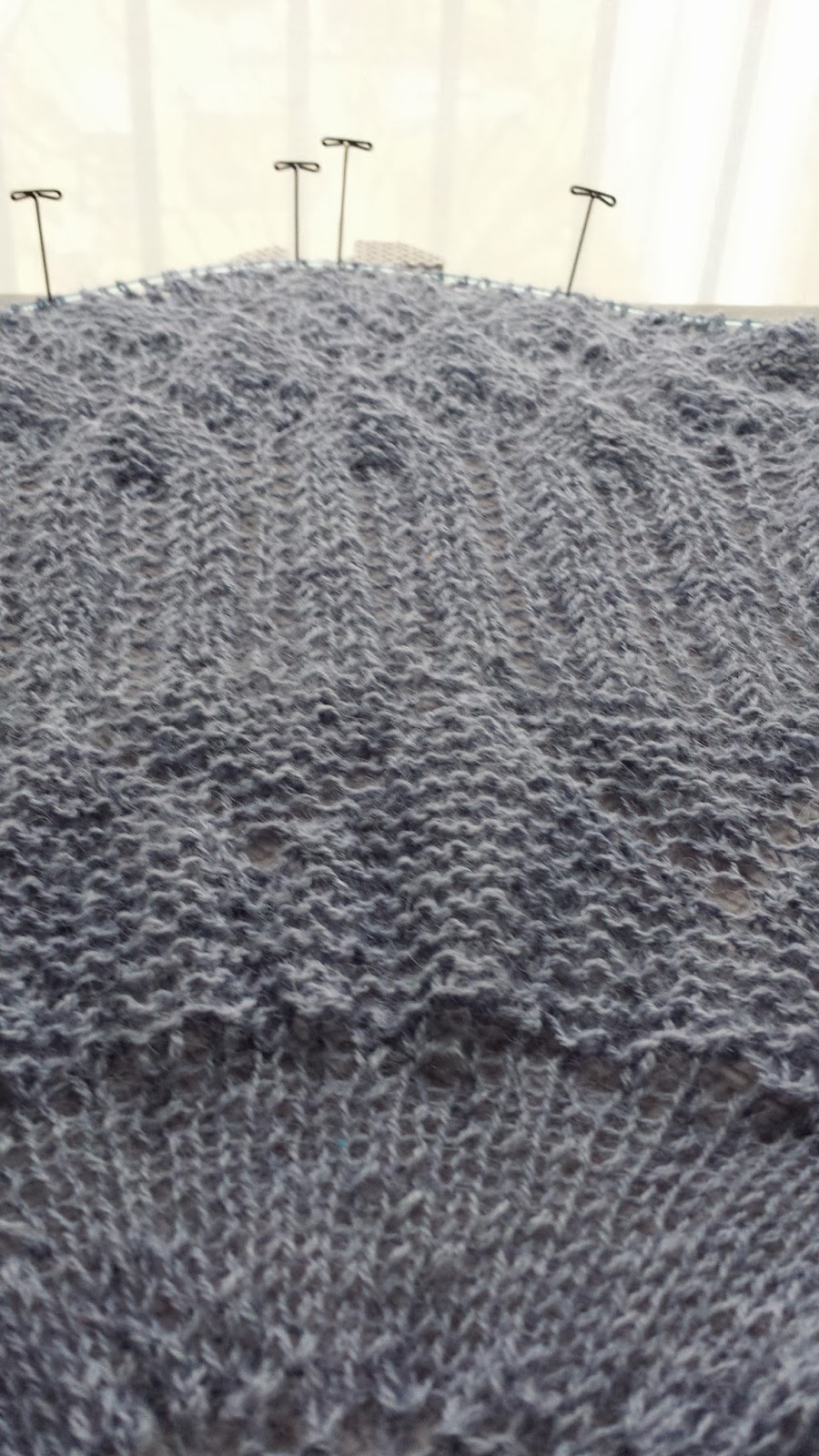 But also a THIRD repeat of Clue 3B! I thought it came out rather pretty.  I cannot wait for Clues 4 and 5! 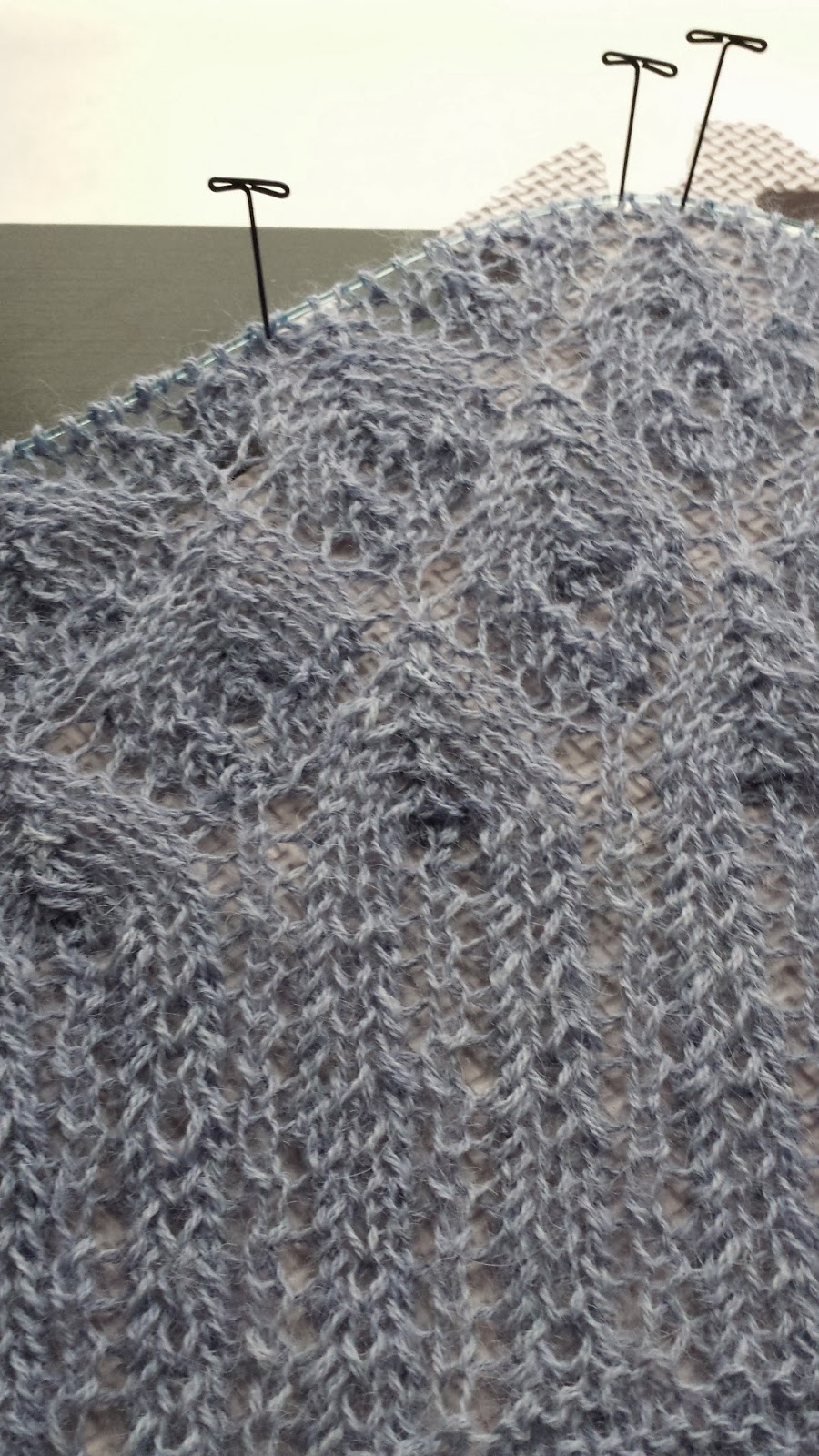 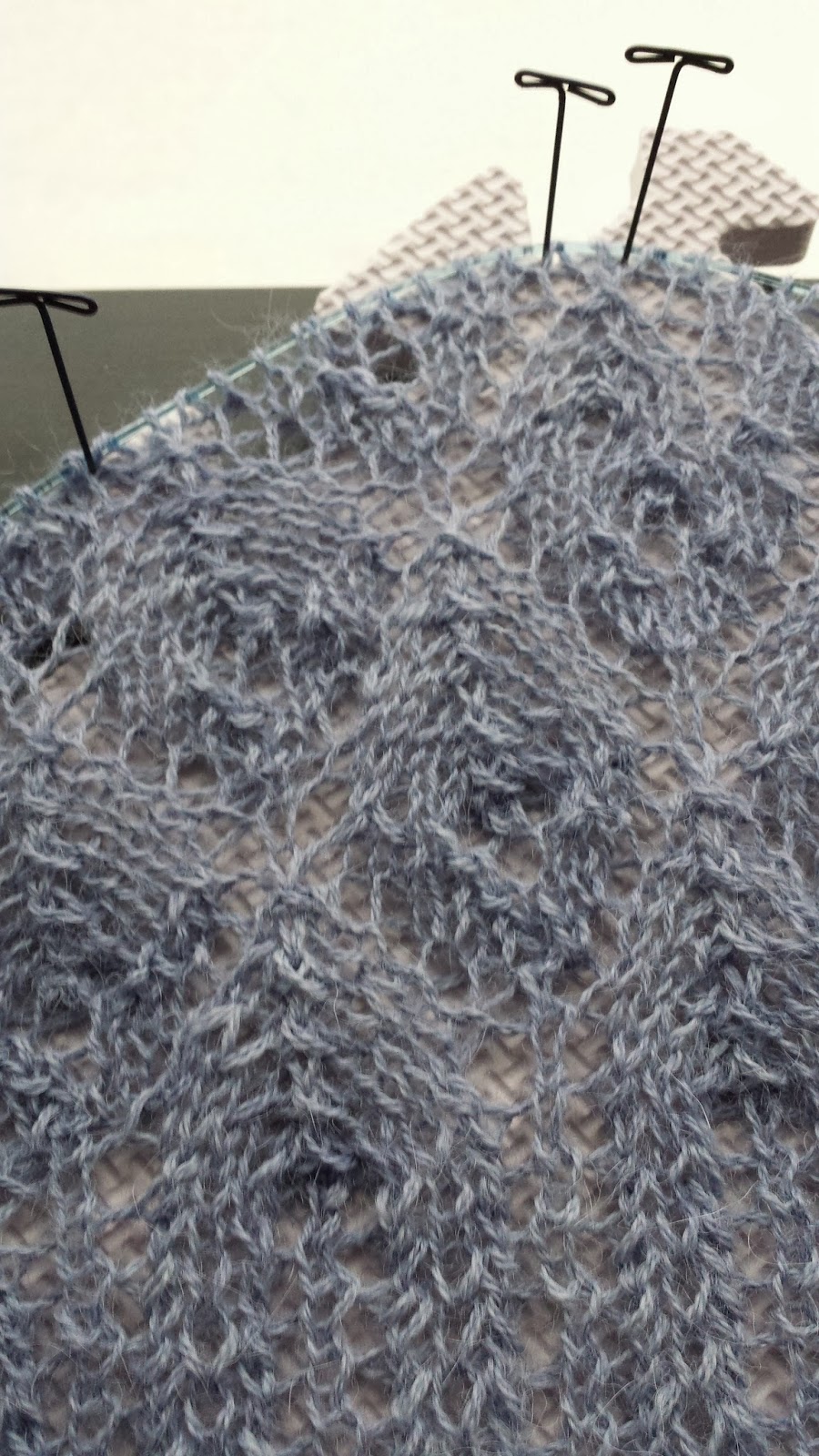 [future Suzy comment here.... this is where I realized I'm an idiot]

Week 4: 4B - Okay. I don't know where I learned to do math! Actually I'm really good at math and logic and puzzles too. But for some strange reason I sometimes forget to use those skills when attempting to do things in my life.

Take this shawl for example.

The original pattern calls for 680 yards.
My yarn has 1200 yards. And because it's cobweb I decided, to hold it double. Do you see a problem yet? Yep, Suzy is now down to 600 yards.

Well clearly I didn't recognize this problem until now... oh on week 4.5?!

Oh yeah and what about the fact that I decided to knit Clue 3B in TRIPLICATE?!!?

I've decided to only knit the first 1/2 of clue 4B and wait to see what Clue 5 brings. Clearly I needed to bind-off sooner rather than later.

Week 5: [Future Suzy here... weeks go by and this entry is still blank]

Week 5: 5A(ish) - After weeks (okay months) of this project sitting on the needles I decided it was time to tackle the drama and figure out how to finish it. I knew I'd have to cut out some bits of the pattern - so heavy modifications were in store. After looking at it and stressing for a while I decided to complete the second half of 5A clue and then just bind off. That's it. Just called it a day. 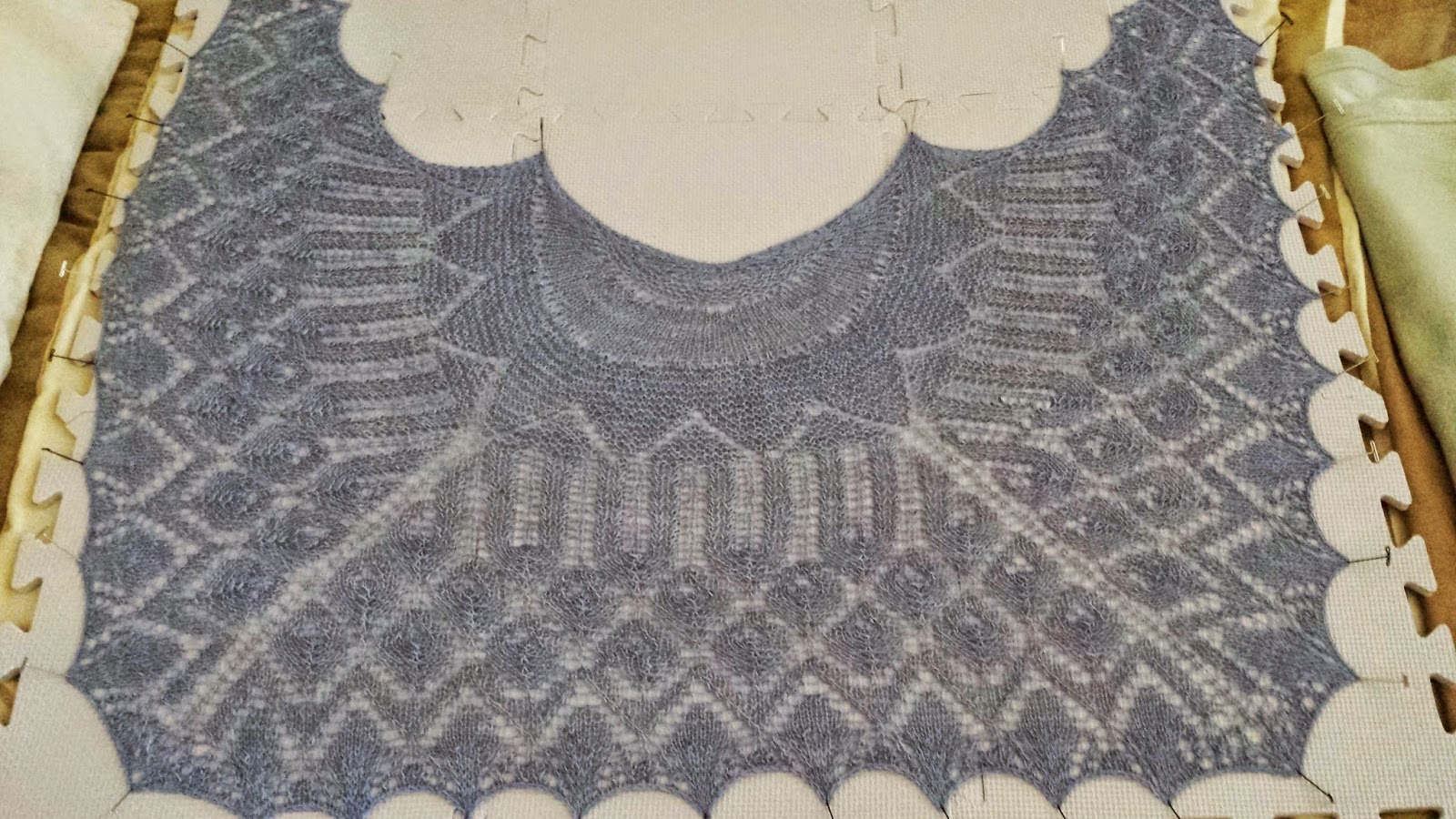 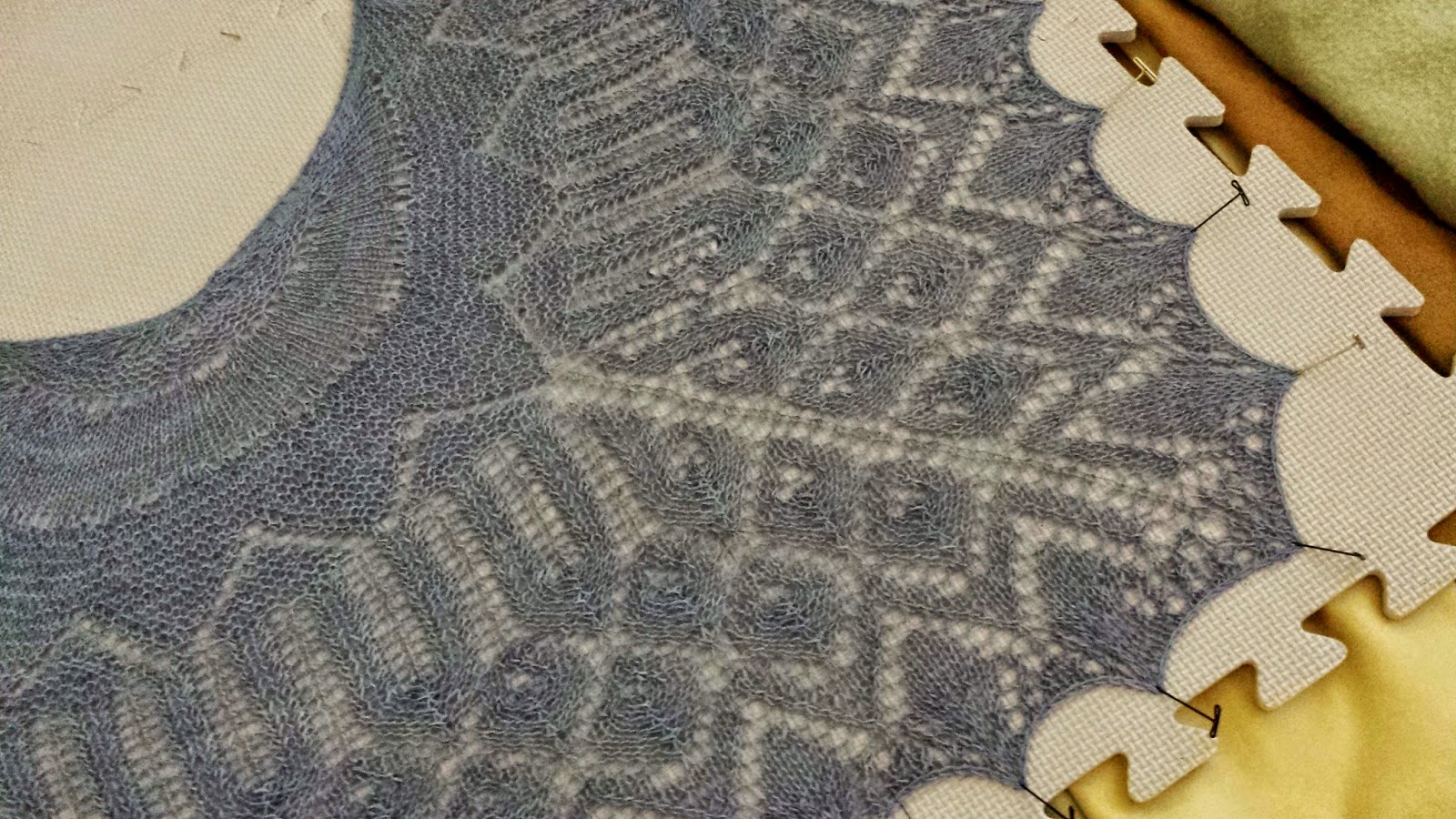 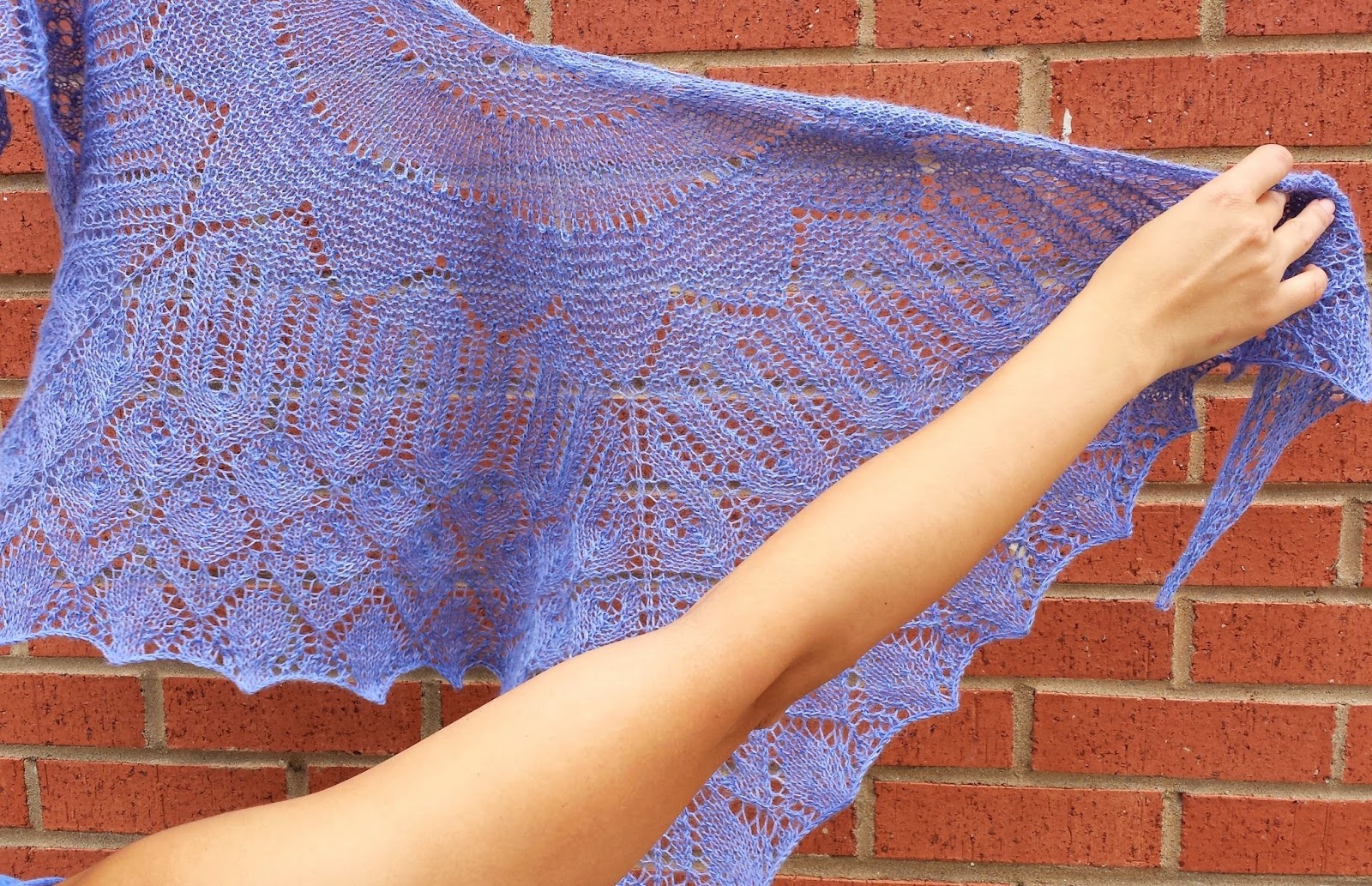 If I could jump into a time machine and do it over I would not hold the yarn double and would have done a number of section repeats. I think this would make a BEAUTIFUL large shawl. But really, I'm happy with the results.

So Lessons Learned -- Always take a moment to THINK before starting something. You'd think I would have learned THAT by now....

A comment about the yarn - it was was interesting....  I had never worked with cobweb yarn before and I'm not sure if I ever will again. Honestly if it had not been a mystery/KAL/Choose your own adventure type of pattern I'm sure I would have frogged and thrown the yarn back into my stash, never to be seen again. (BTW I'm talking about the yarn and NOT the pattern). The yarn was nice (100% alpaca). But even held double and I just know that cobweb weight is not for me.

And as I've mentioned it was my first KAL so I wasn't sure what to expect (if I'd feel awkward joining in or what). Come to find out -- it was a LOT of fun! It was all virtual - via Twitter #irisharrowkal or on the Ravelry group, Follow Your Arrow. The forum allowed for assistance when needed, spoiler photos when you couldn't make a decision and just a good place to find other knitters experience the same thing. Convos via twitter were fun and exciting. I frequently conversed with a couple of knitters in Ireland and Wales and even though the time difference we had a blast bantering back and forth about this KAL and other knitting thoughts.

And finally, this was simply a fun knit and beautiful design by Ysolda. How she comes up with a shawl design that can be knit into 32 different shawls just blows my mind. This lady is inspiring. 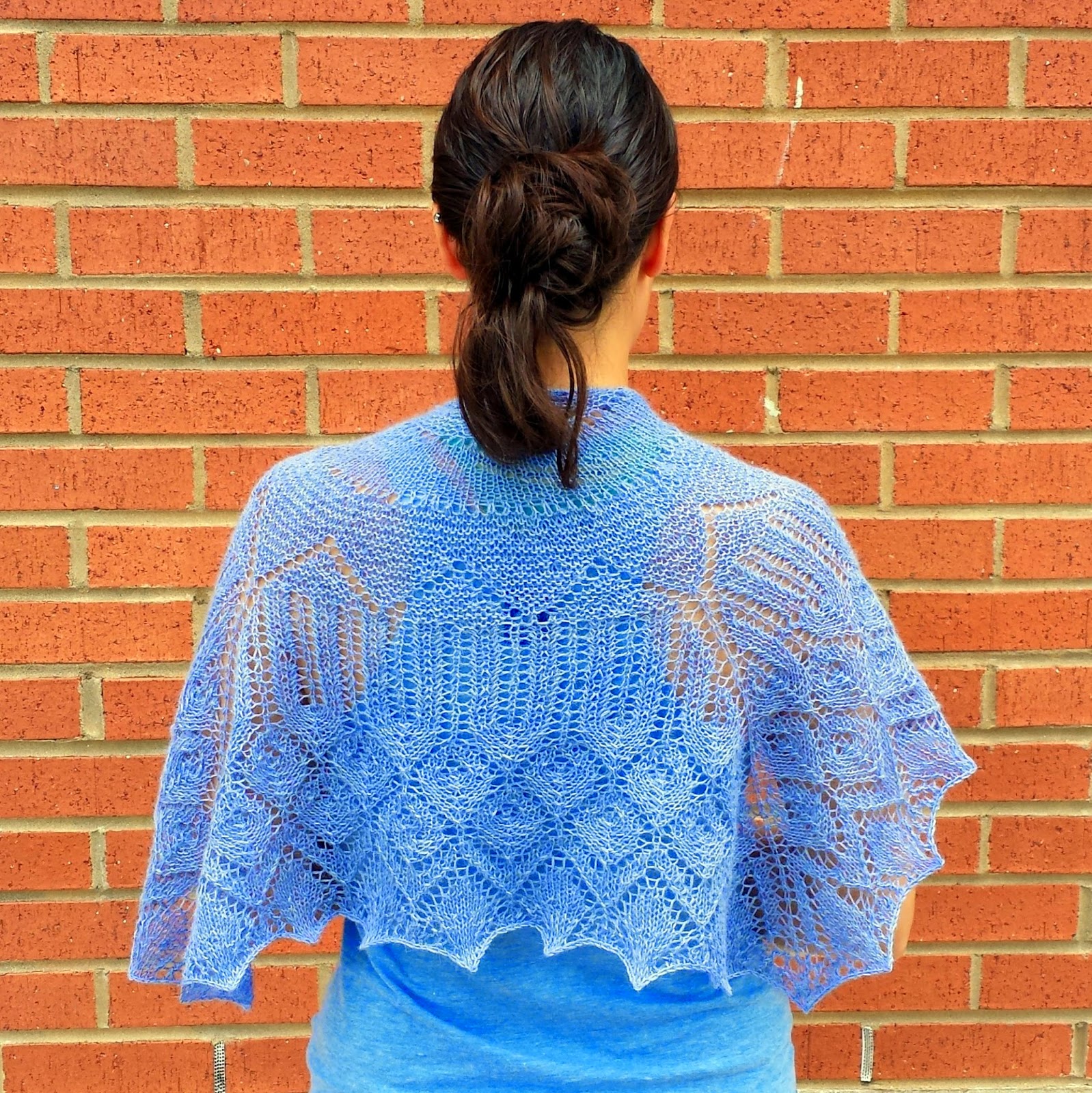 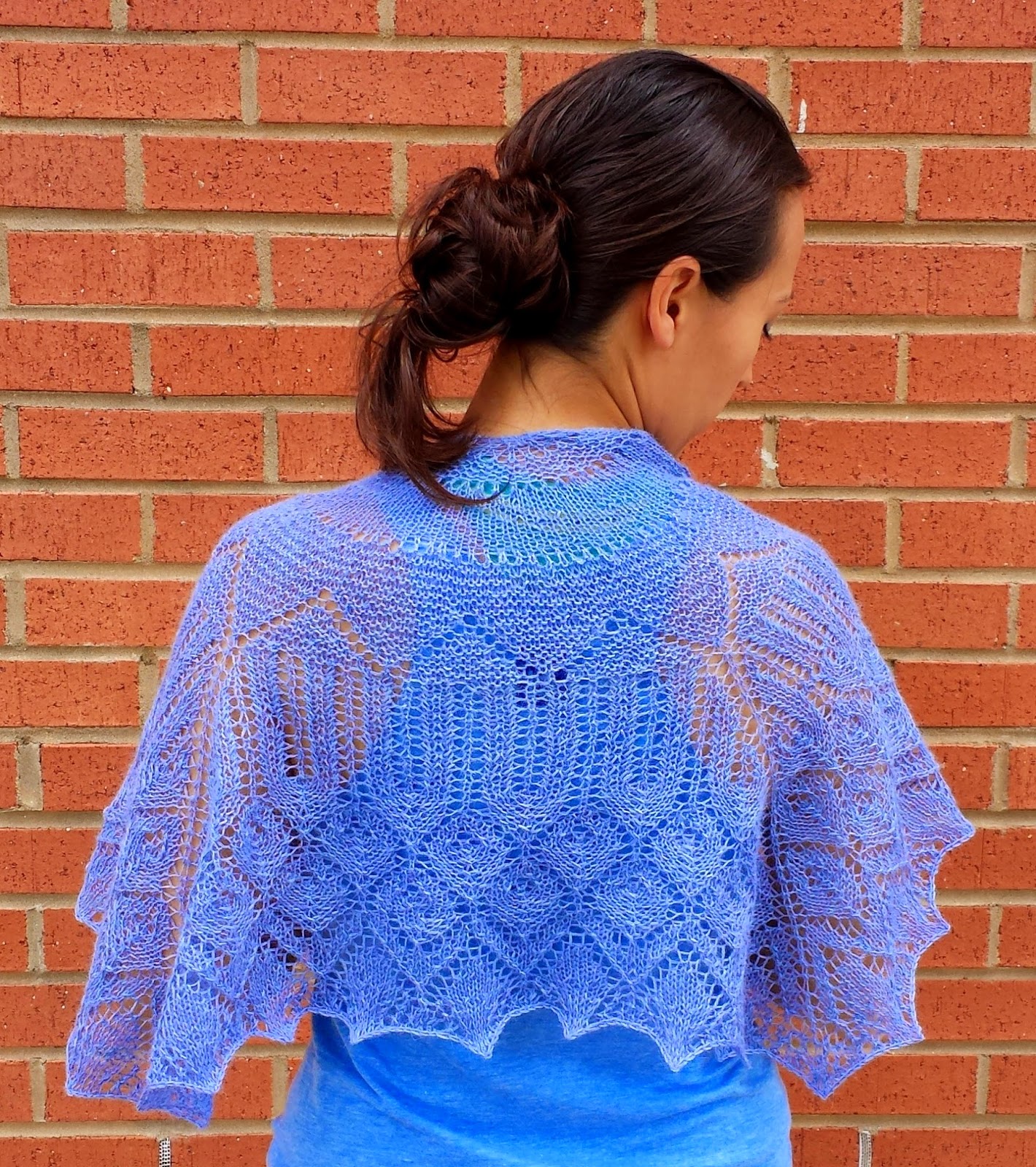 Overall, a fun (albeit frustrating user error) knit! I think I'd do another Ysolda pattern, KAL, or mystery KAL in a heartbeat! It would have been nice to finish the project at the same time as the others. But it all worked out in the end. And I'm happy to say I actually like the shawl quite a bit. 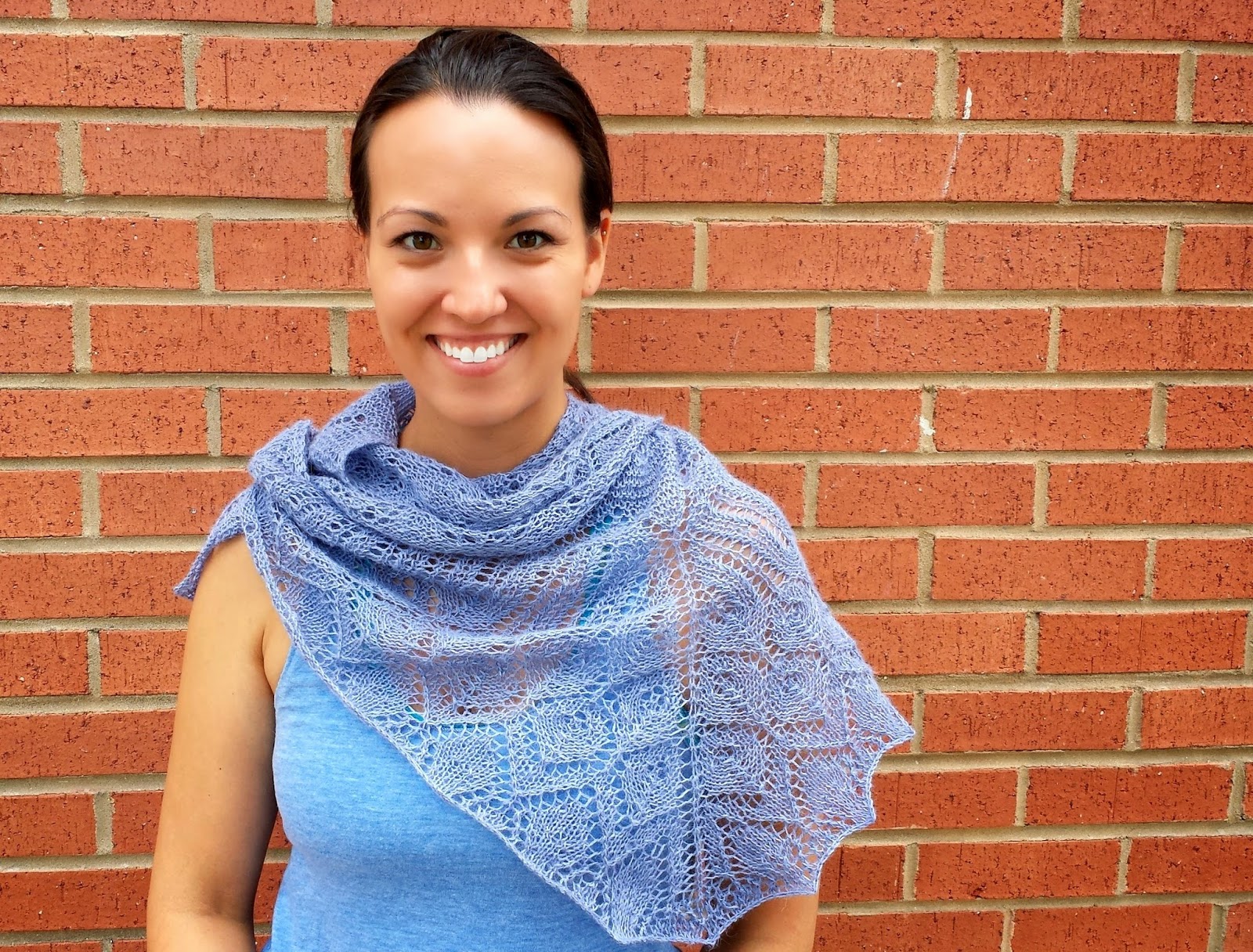