One project was not included in last week's project update post. Not because it's nearly complete (no where near that!) but because it has a story that should be shared.

If you recall I recently knit my husband the Dr. Who (Tom Baker) scarf. Well as cute as he is I figured having a respectable scarf would probably be good. Especially during those times when he needs to dress a little nicer... having a 60's inspired 12+foot scarf probably won't cut it.

So I decided to knit him a scarf that would look nice but also still have a hint of geeky, just like him.

Enter the One Ring Scarf, by Diana Stafford. This is a scarf inspired by the Lord of the Rings, with the ring inscription knitted into the scarf. But to be a little more complex... this is a double-knit scarf so the inscription is knit and can be read (correctly) on both sides of the scarf!

Well, I've been working on this for a while. It's my first double-knitting project, and thus far I like how it's coming out.

After the mishap. Well number of mishaps.

First I had to teach myself how to double knit. THANK GOODNESS for YouTube! Lissaplus3 has some excellent (and short) tutorials on various knitting techniques. Apparently if you want a really nice looking CO in double knitting you need to do things a little different than normal. For that I watched her Double Knitting CO video: http://www.youtube.com/watch?v=SQOZ8GWM9sE.  And for the actual double knitting I watched another of her videos: http://www.youtube.com/watch?v=YEXLwmTB5Ts. 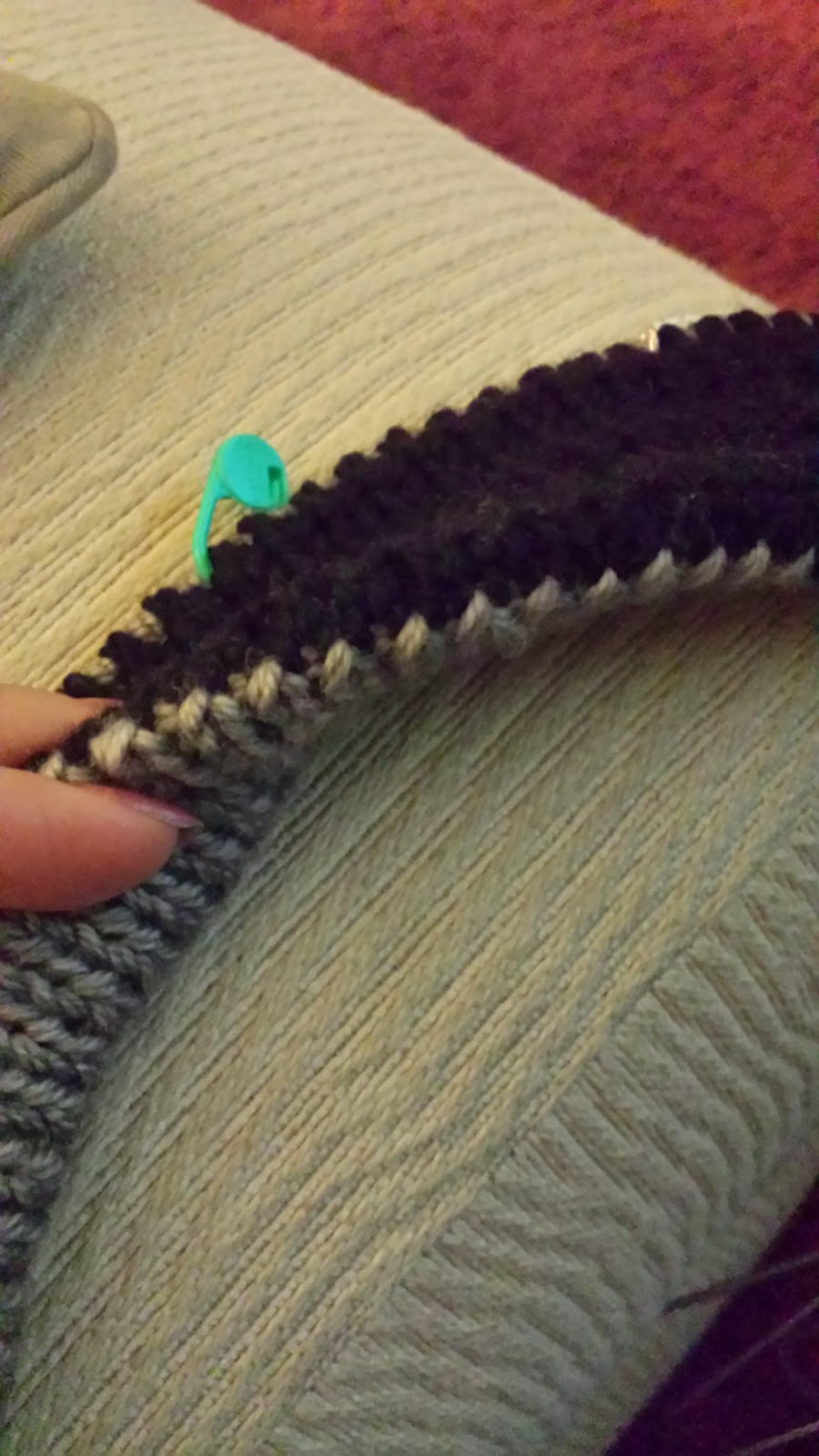 As a side note - I think my combination knitting method actually makes double knitting a breeze! Rather than flicking my finger down and around the needle for the purl side, I just keep holding my yarn up (as I do with knit stitches) and just pick at the yarn with the working needle. If I remember sometime I'll snap a video.

So CO and starting the scarf was a breeze. 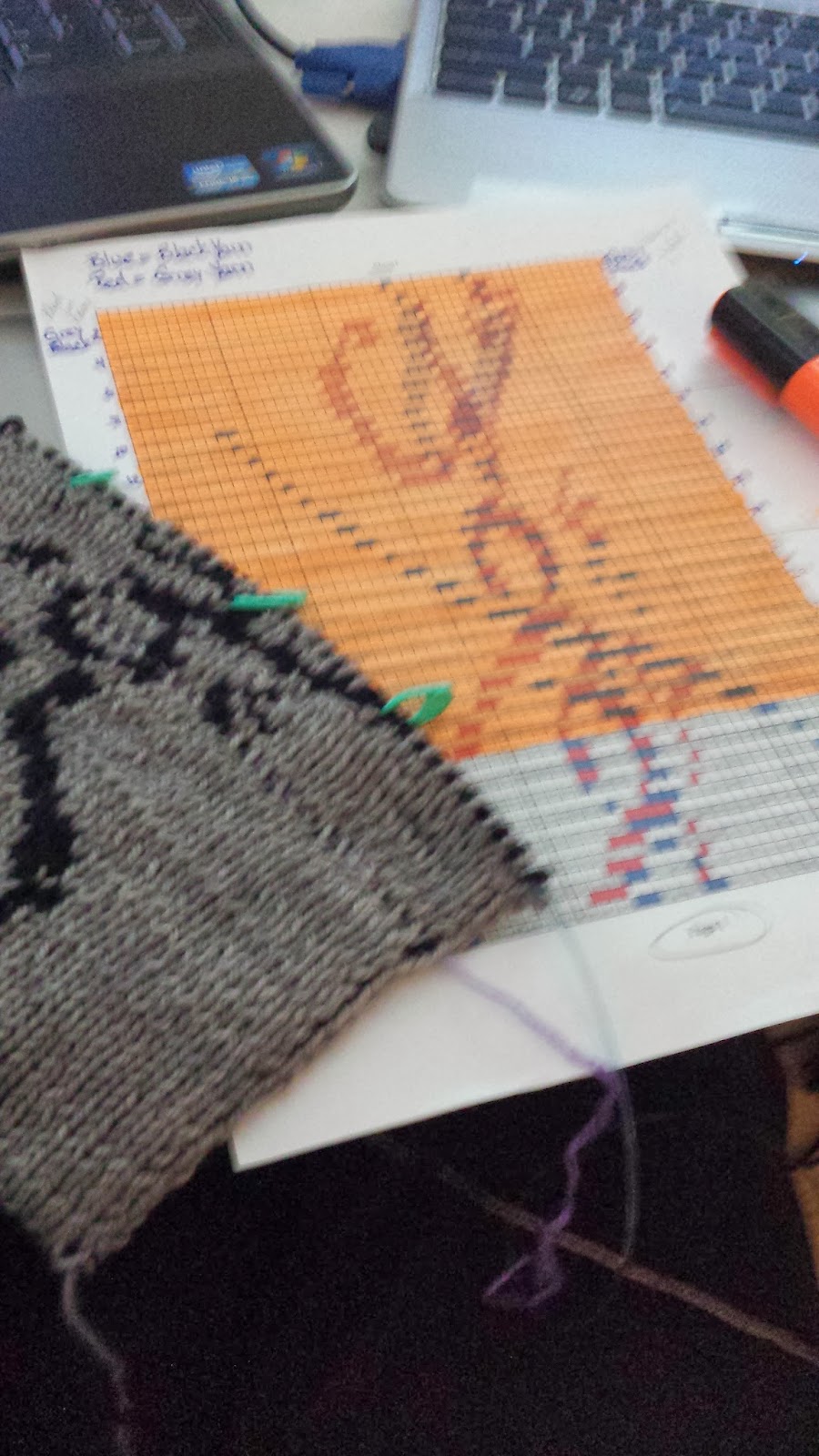 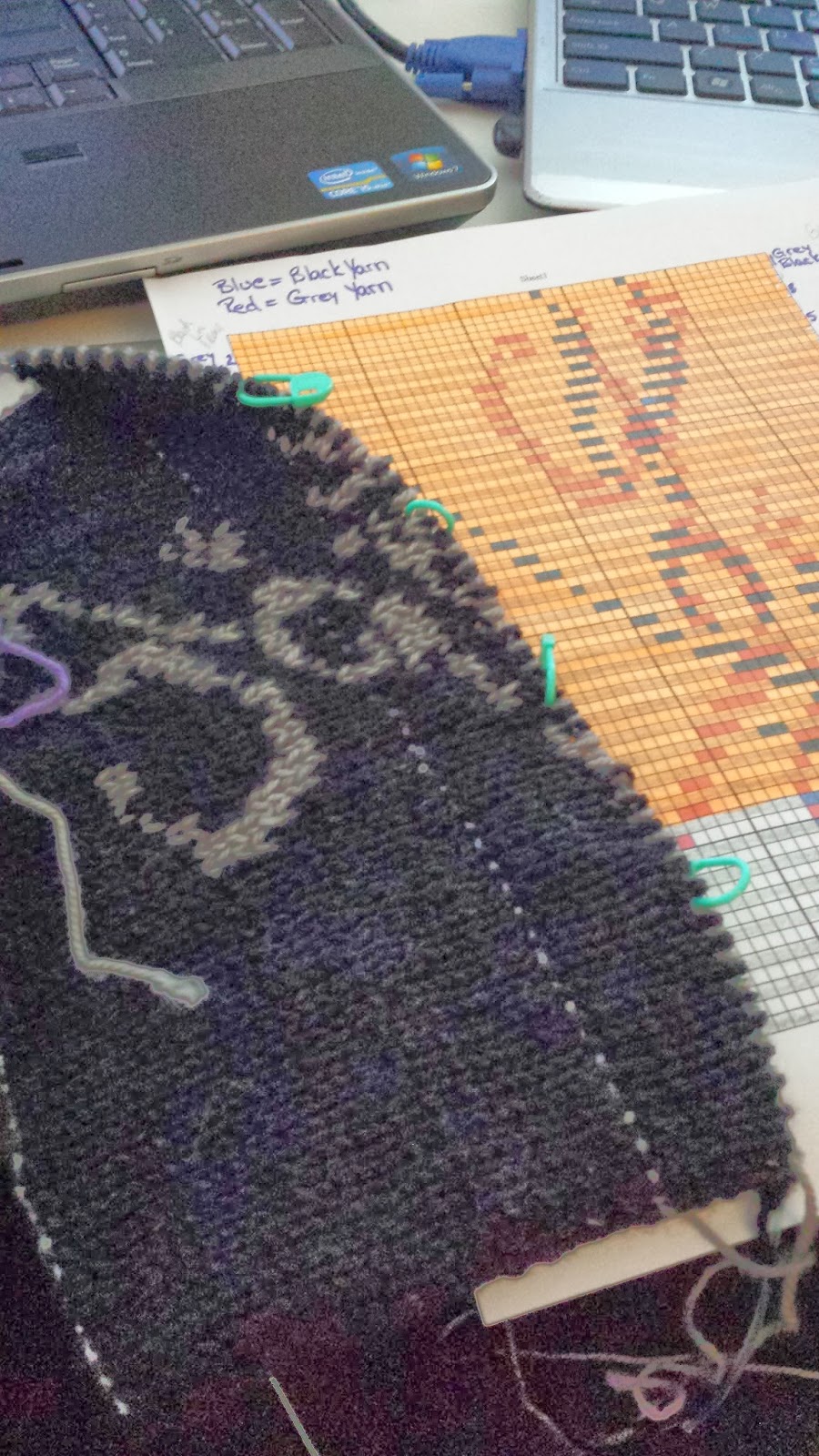 I frogged back and started again with holding the yarn normal (I'm so glad I got that swift and ball winder for Christmas!). I started again with everything going great. The hubby's b-day was January 13th so I kept the scarf on the needles (I was only about 1/4 of the way through) and presented it to him. First thing he says to me... "Um.... babe...."

Apparently I had one side correct... but the other side was getting knit mirrored. Yep, my husband can apparently read elfish (that's what language the inscription is written in) AND could tell it was backwards.

Rip back of course! 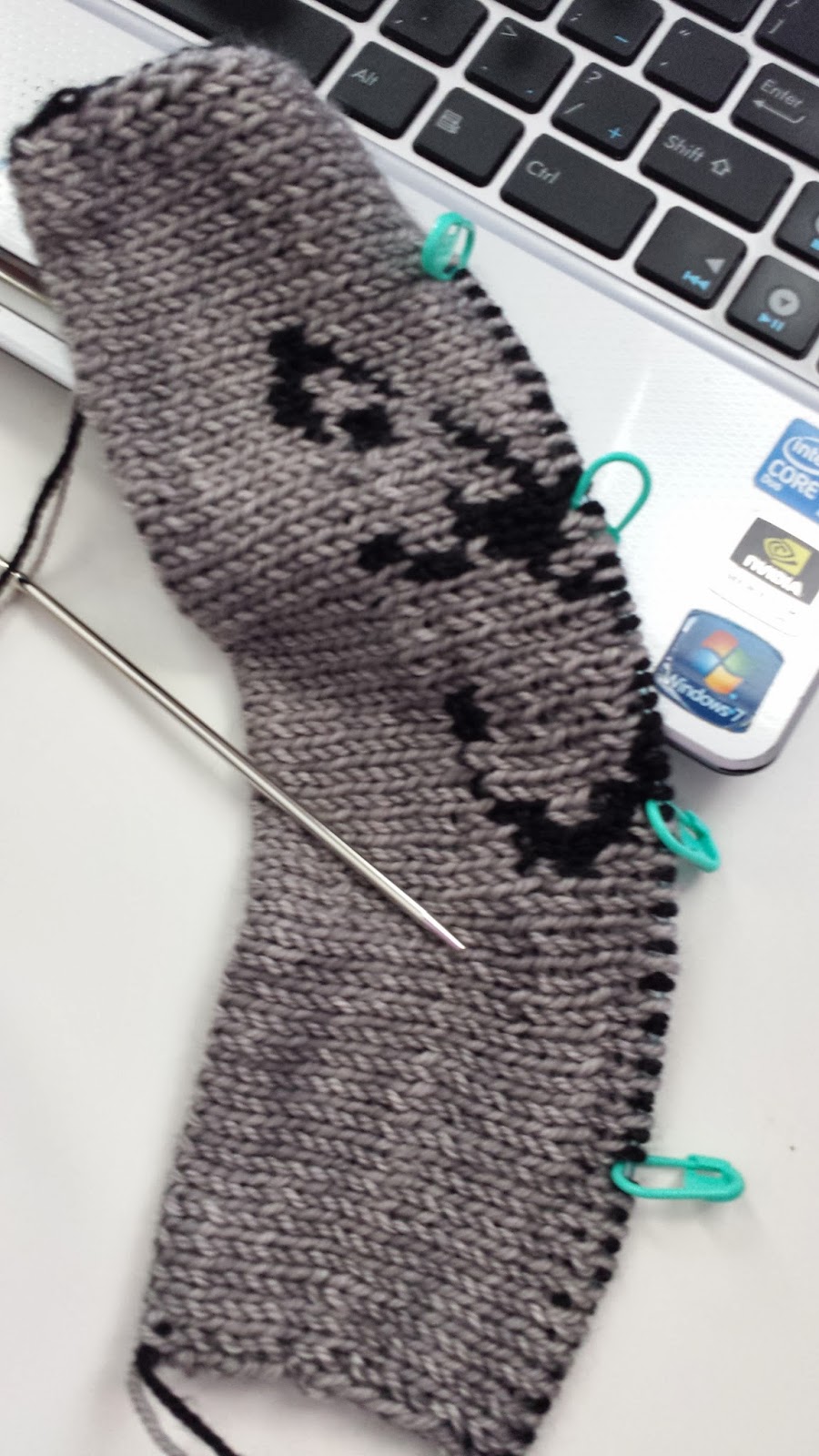 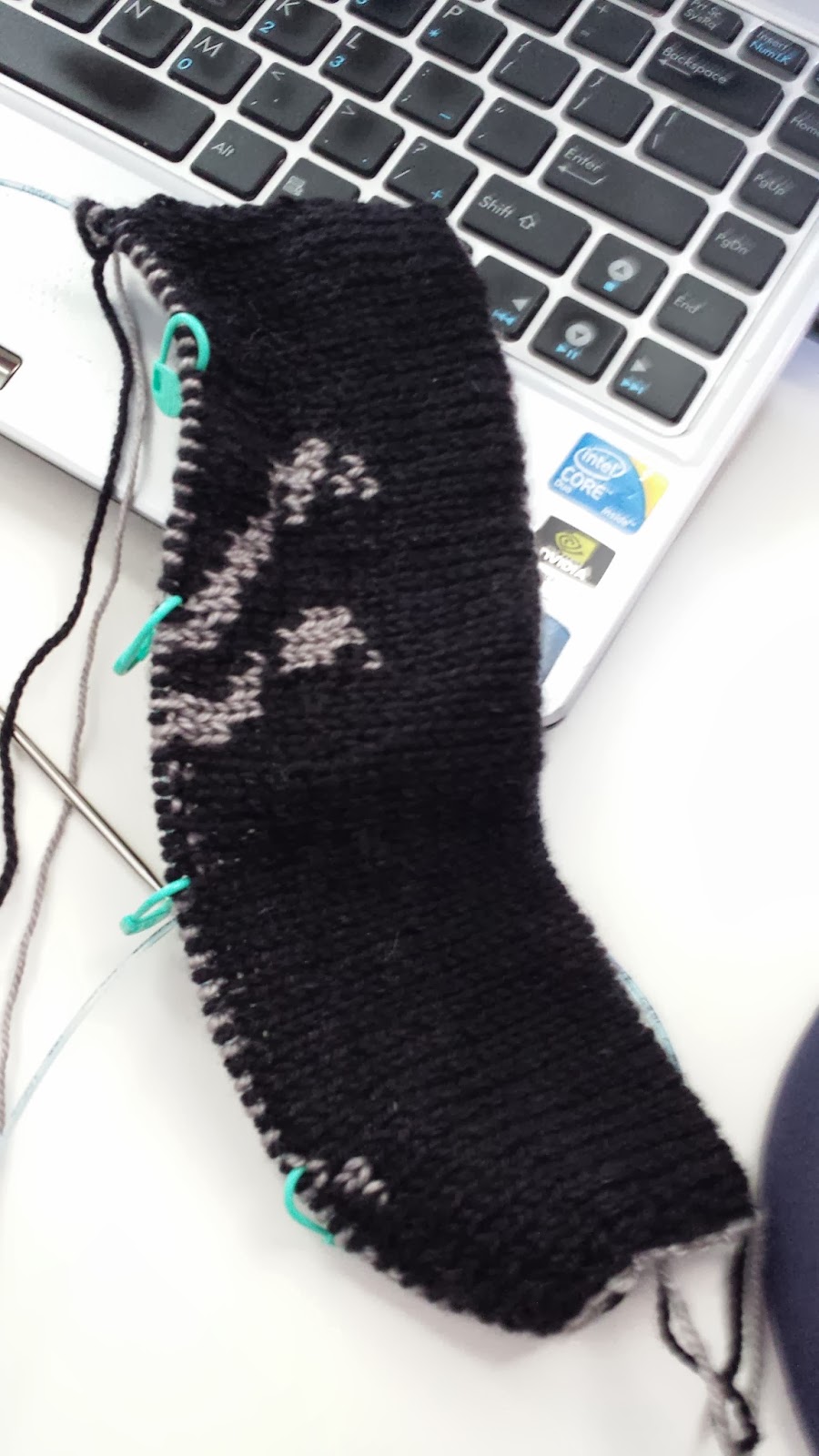 Yeah this one will be on my needles for a long time. It will probably be my random spring/summer/fall knit when I get bored of other knits.

He'll get it next winter.