A while back a friend asked me to knit her nephew a beanie hat in the likeness of a football.  I figured this would be pretty easy.  And it totally was! 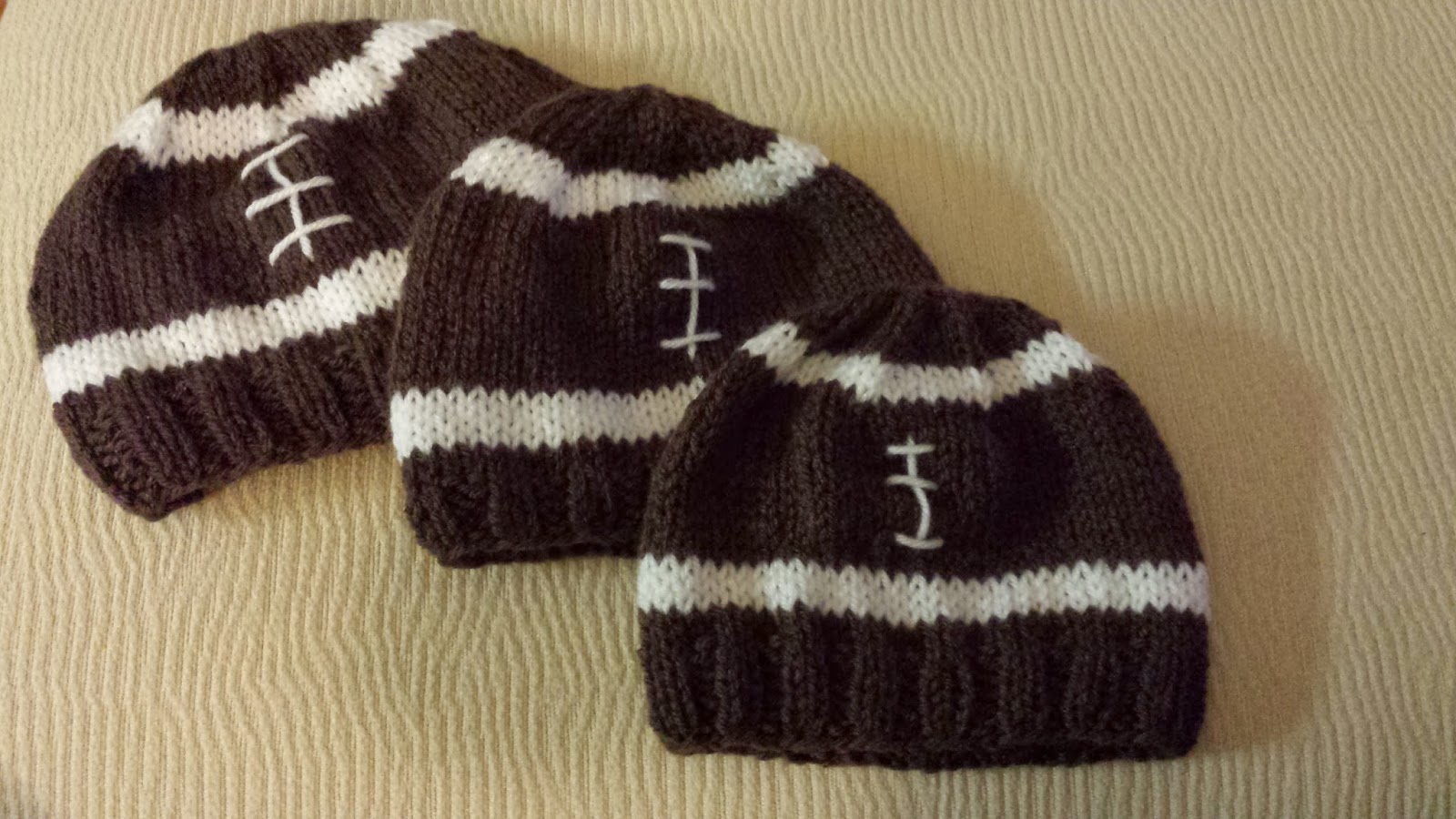 Because I have NO concept of baby and kid hat sizes (other than most kids have big heads), I enlisted in assistance from the Twitterverse.  Luckily some nice Tweeps came to my aide and pointed me in the direction of some good resources for baby and kid head sizes.  This was very fortunate as my next step would have been to go to a park and start measuring kids' heads - which probably would have ended with me getting arrested and slapped with some sort of restraining orders.

Once I familiarized myself with baby head sizes I was ready to find a pattern.  Ravelry is an amazing resource for pattern searching and browsing (as I mention almost daily).  I found a couple of cute football hat patterns but I ended up taking a basic hat pattern by Kristen Ashbaugh-Helmreich because she had sizes ranging from infant to XL-Adult.  And because it was a basic hat pattern I figured I could easily add my own color pattern. 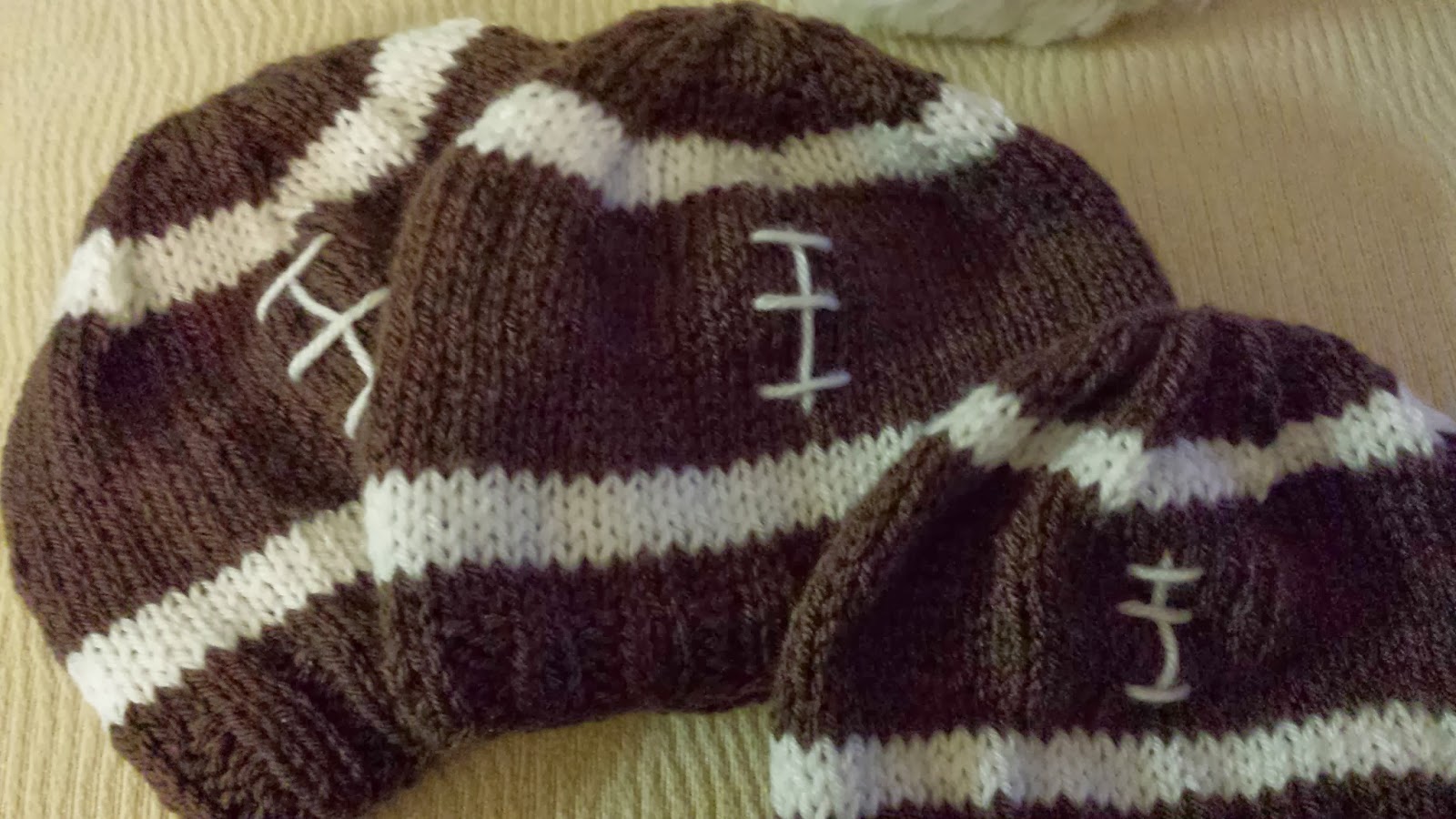 Yes I went a little nuts and made three hats.  Actually it's because initially I thought the first hat was too small (but turns out to be just right for a toddler).  I ended up getting about 14 sts per 4 inches so I CO 64 sts for the toddler hat, 72 sts for the child hat and 80 sts for the xs adult/child hat.  I maintained the ribbing as directed by the pattern for each size and two rows after the ribbing ended I started the first white stripe.  The second white stripe was started on the second row of decreases.  And each stripe was either three or four rows of white (depending on hat size).  Also, as a fun note, I tried a new technique - jogless stripes!  If you've knit stripes in the round you know how you get a "step up" each time you change color.  TECHKnitting has an excellent tutorial on how to knit stripes in the round and avoid that "step up" color change.  It's called jogless stripes and the tutorial is found at the link. 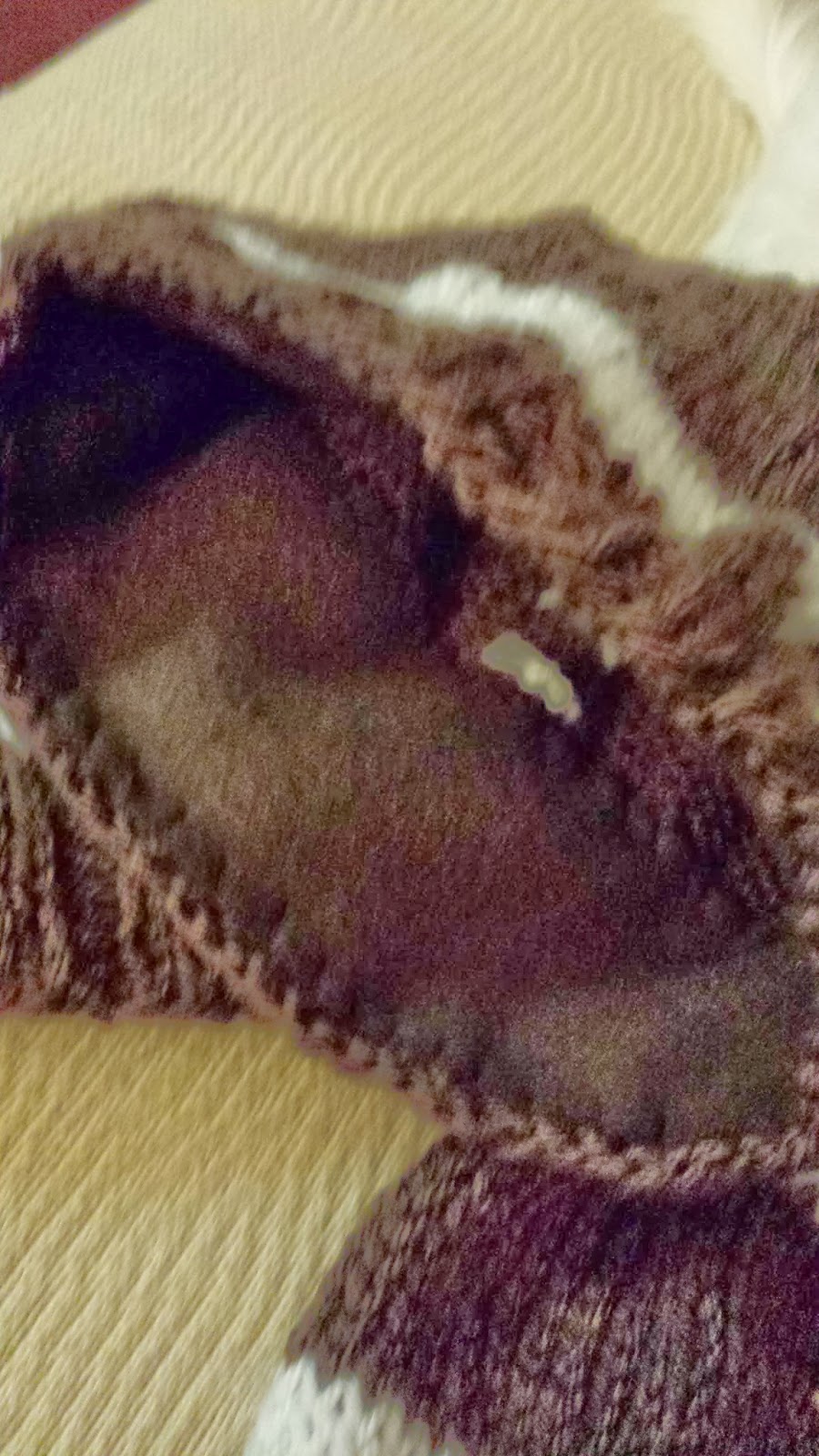 In addition to jogless stripes, this hat gave me a chance to hone another skill - adding a fleece liner.  I've found that even with the softest, most elegant of yarns... things will occasionally get itchy. Especially when you have kids running around in layers.  One way to avoid that is to add a layer of polar fleece to the knitted hat.  And lets me honest, this adds another layer of soft warmth.

Yet again I looked to TECHKnitting (seriously this lady is amazing) and found a nice tutorial on how to add a headband of fleece lining.  I decided on that rather than the whole hat because 1 - I don't have any of these three kids near me to measure heads for accurate fit, and 2 - these are three boys, it's possible that two layers of fabric might be too much for these highly active boys.

The pictures are not the best, but I tried to show the headband lining.  The tutorial is written very clearly (it's my sewing that is wonky) and can be found again at the link. 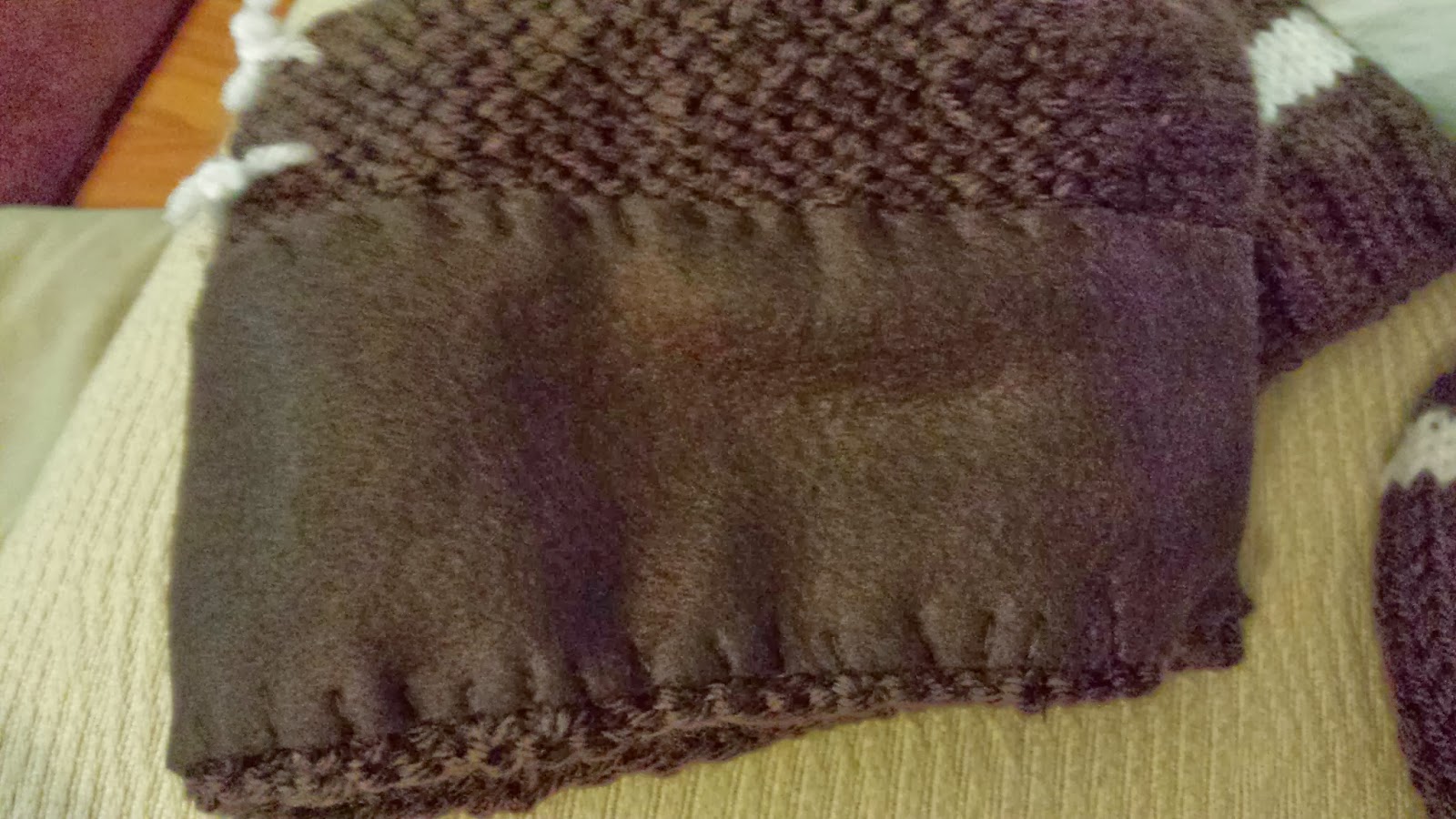 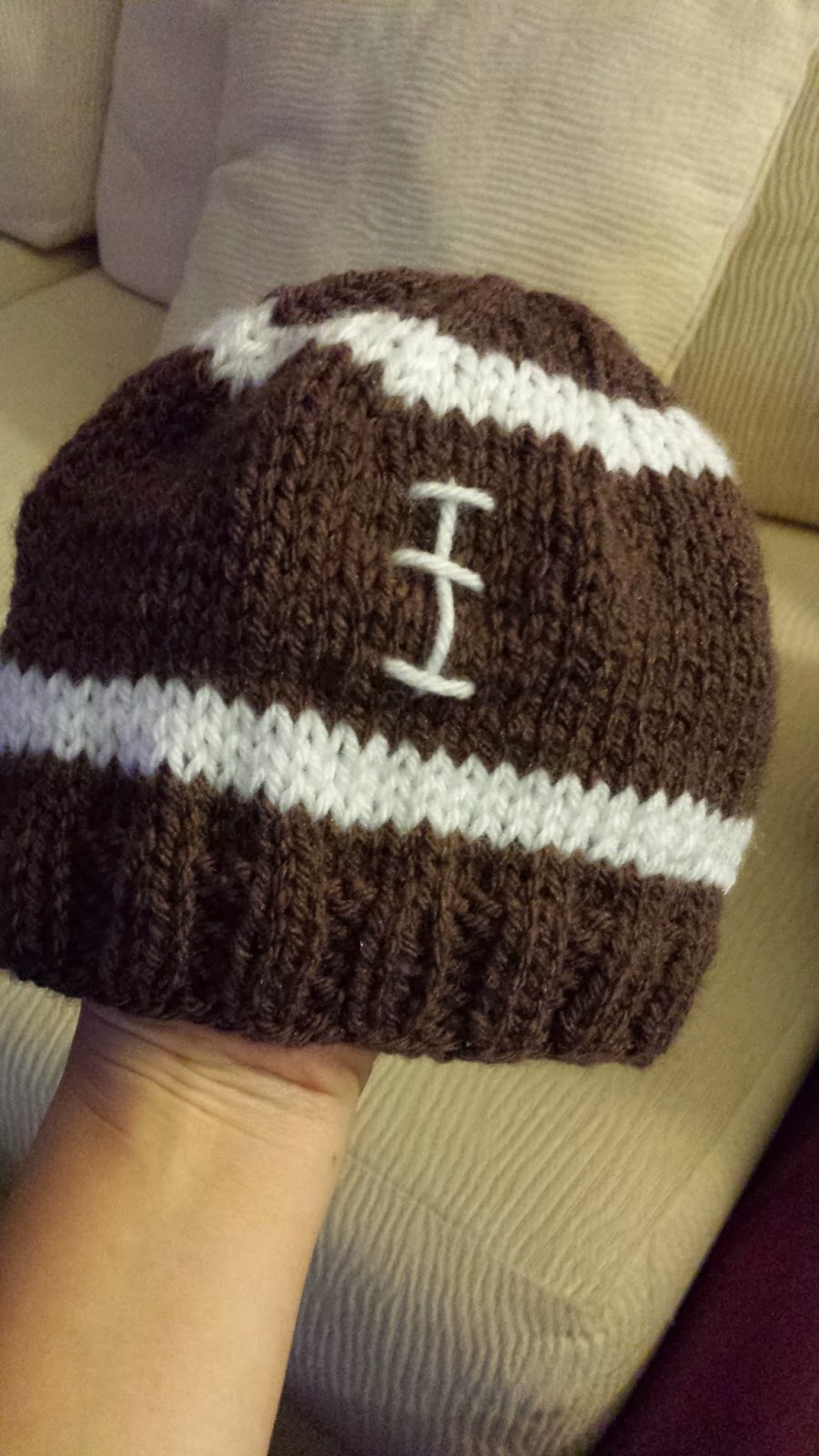 Overall I'm very happy with the knits.  Totally fun and I see why people like knitting kids items because they are very quick and a great way to try out new skills and techniques!