A while back a dear friend mentioned Meetup, a Website that facilitates social networking based on interests.  I searched my region and was pleased to find a number of groups related to many of my interests! Even for an extrovert like me it did take some guts to join a group (virtually) and then to attend an actually meetup.  But I did it and I'm so glad I did!

One meetup is a small dog meetup which is perfect for Rosie.  We are currently enrolled in obedience and Rally-O classes but Rosie is very shy and scared during class.  Granted she is the smallest dog in class (and we are the biggest people!) but we also know she was neglected in her previous life, and we speculate that she might have been abused, so she is really shy around people and other dogs.  So we've joined this particular meetup because the events are geared to playtime for small dogs and small dogs only.  We've gone to two meetups thus far.  The first class was tough, Rosie would hide between our legs and whine to sit on our laps.  She even started drooling and showing other signs of stress.  Luckily this month was better.  Within five minutes of arriving Rosie actually started running around the place!  She would run behind the other dogs and chase them, although as soon as a dog started chasing her she ran back to us all scared.  But overall it was better and she didn't drool as much!  So we are thinking this small dog social hour was a great step towards getting her socialized.  (Sorry for the blurry pictures but it's really hard to get pictures of dogs in motion). 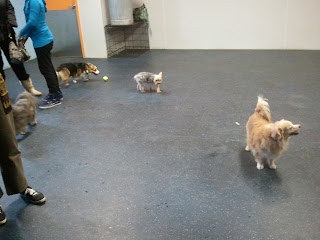 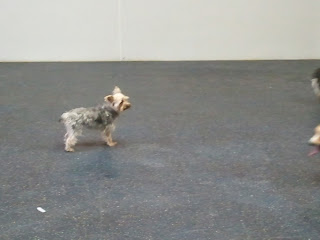 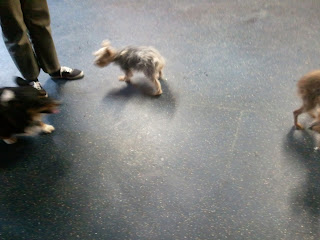 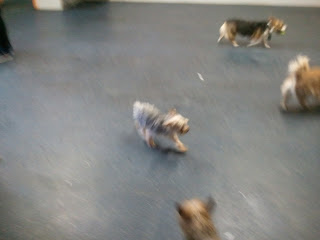 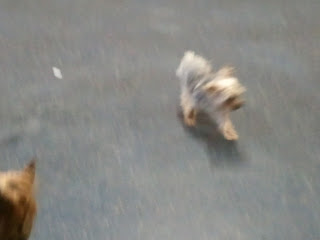 The other meetup I joined involves knitting!  I have had plenty of knitting peeps in the past but I've never really knit with other people.  Right now I can't knit at home because both Rosie and Gwen Bean both think they are cats and will chase and chew on my yarn while I'm knitting.  And being (relatively new) to the area, I thought it'd be nice to meet some new peeps.  So I found a couple knitting meetups and joined one of them chosen semi-randomly, that is, mostly based on the yarn and martini glass logo.  The first few meetups have been successful and I'm really liking the group of ladies.  I haven't been brave enough to take pics of the group, but maybe I will later.  :)   But for now, I'm really enjoying new ways of being social - with my dog and with my knitting!