In addition to a doggie poop bag dispenser, I've also knit a couple sweaters for Rosie and the next four posts will feature the sweaters.

After searching Ravelry I discovered plenty of really cute (FREE) doggie sweater patterns.  And don't worry, I'll support my knit designers later... but at this time I needed easy and free patterns to get back into knitting.

I ended up finding a really cute pattern (Francesca/Sharkey) that buttoned up on the sides.  But of course I cannot simply follow a pattern as is....

Rosie has a pretty long neck and body that are surprisingly long for her small stature, so I ended up knitting a collar that could be folded or kept up and longer body length.  Also, I wanted something simple with the buttons because I had fears of her chewing and eating plastic buttons.  Yes I know this was irrational because really fabric buttons wouldn't be any less worrisome... nonetheless, I ended knitting bobble-like buttons for the sweater.

My first attempt was with a really weird yarn I had in my stash.  Not the prettiest yarn.  Not a great color for Rosie.  But I figured this first attempt could become my own pattern that I could then modify and learn from. 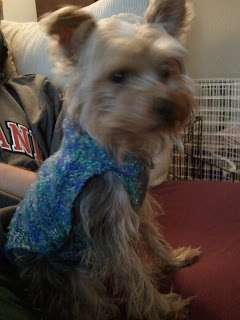 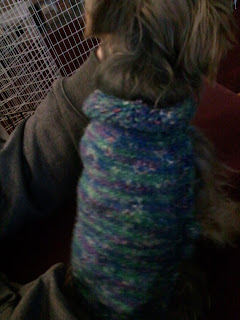 Overall, not too bad.  Just ugly!  But for a first sweater, and first "major" knitting project for me in a while, a success.
Email Post