Last week I made a big oops.
As I was leaving my internship I had a sudden urge to buy yarn.  Silly, I know, because I have a huge stash and I have not been knitting at all.  But I really needed to buy something, specifically yarn, at that very moment.
I just happened to be driving by, not not a LYS, but a big box store.  So I quickly pulled into the parking lot and opened up my door -- only to have it BLOWN out of my hand and smack into the car next to me!  I quickly jumped out and checked the car next to me as well as my car door.  I didn't see any dent, only a small tiny scratch.  But I felt so bad!  I didn't know what to do.  And after the fiasco from the previous year when my car was damaged by a hit and run, I'm a little hypersensitive about these sorts of things.  Plus, I felt really bad about putting a scratch in someone else's car.  So I did the nice thing, I took out a piece of paper and wrote the owner of the car a note, apologized and signed it with my name and number.
And then I decided that because I already did some damage, why not go in a buy some crappy ass yarn!?!  So I did.  And I bought this: 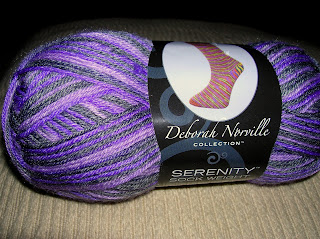 I really don't know what it is.  Deborah Norville?  Serenity?  The content is 50% Merino, 25% Bamboo and 25% Nylon.  It IS wicked soft.  And it is in a nice purples and black/gray colorway.  I have no idea what I'm going to do with it.  But it was cheap, and I needed to spend money at that moment, so I bought it as a splurge.

Finally, that evening I received a phone call from an elderly gentleman.  He wanted to tell me that he thought that my note was a very honest, caring and noble deed.  He said that he had not seen a nice gesture like that in eons and he wanted to call and let me know that the car is fine, he didn't even see a scratch and wanted to thank me for being honest.  He really was surprised and humbled by my gesture.  I'm glad I did it.  I was a little scared.  But looking back I'm proud that I was honest - yes maybe a little hypersensitive.  But who knows, maybe I just did one of those pass-it-on gestures.  I know I saw at least two people watching me leave a note (and take a pic of both cars - I told you I'm crazy).  But I hope I continue to do little gestures of kindness like this - it made me feel good knowing I helped this man, as he put it, "feel that the younger generation isn't that bad, after all."
Email Post
Labels: Car sock yarn

lunaticraft said…
Awww man! Car things can be sooooo scary. Especially worrying if you're going to have to deal with insurance, and so on and so forth. =( I'm glad everything worked out alright!

As for that splurge, I think you'll be pleased. I've used that yarn before, and I loved the way it felt once it was knitted up. Super soft. Now if only I didn't have to frog the project because of my own stupid mistakes. Hahaha
February 22, 2011 at 1:48 PM