This past Friday I attended a really great workshop on Applying to Academic Librarianship positions.  Little did I know that I will have to do as typical academic faculty do in the process, such as having a portfolio, CV,  presentation and research.  I'm very glad I attended!
After the workshop the SO and I met up and we walked over to Lucas Oil Stadium.  The stadium is just a couple of blocks from my campus in Indy so we got to see this: 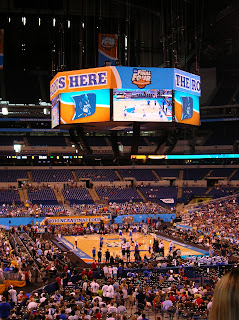 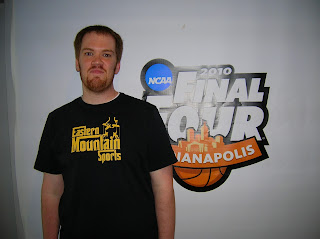 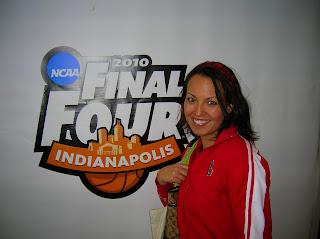 Final Four crowds!  We missed the practices because they were earlier in the day.  But we saw the start of the College All-Star game and saw a couple of famous coaches. 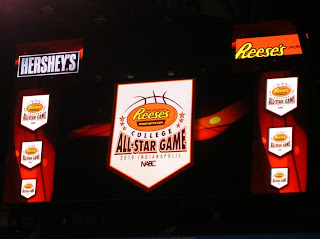 At one point I noticed they were throwing orange things into the crowds.  I thought it was a t-shirt so I threw my purse and stuff on the SO and took off down the stadium seats and snagged one of these.  A bright, orange Reese's drawstring bag.  Hey now I have a bag to wear while running... makes for a great reflector! 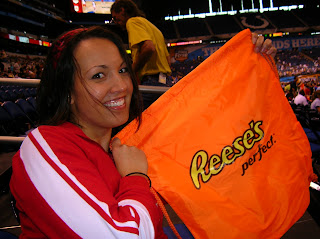 Following the madness that was downtown we drove out to the IMAX to see Clash of the Titans.  Okay, FYI: I am a HUGE fan of the original.  It is the ultimate Craptacular film.  Yes Craptacular.  This new take on the movie though... not a fan.  Not at all.  The acting was bad, the special effects were bad and even the action fighting scenes were boring!  The best part of the movie was when they paid homage to the original with BoBo the mechanical owl!  So my advice is save your money, it is unfortunately a dud.

In a couple of days I'll have a post of my sweater... be on the lookout!!  :)
Email Post
Labels: NCAA basketball