The SO and I are on our drive up to NH and I thought I'd get a post prepped and scheduled for launch.  I hope you all had a wonderful Christmas day and wish us luck as we drive from IN to NH!

Today's post actually takes us back to December 12th, when the SO took me out on a date.  Yep lucky me as I got to see Star Wars In Concert.

The SO loves, loves, loves Star Wars.  Not the - dress up and run around with light sabers (hopefully), but loves it enough that he would write a thesis dissertation on it if he could.  I don't know how that would fly in neuroscience/digestive anatomical studies - but there you go.  Now you know how nutty he is over this stuff.

Well he wanted to go and asked me to accompany him. I love symphony and orchestra; in fact, I love all kinds of classical music.  So I figured it would be too bad, even if I'm not a huge Star Wars fan at least I could enjoy the concert.

Well as the concert started the lights dimmed and we saw this: 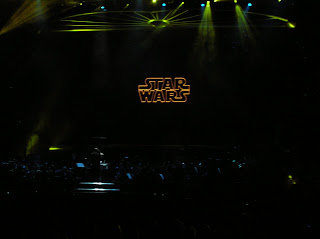 The iconic logo and the very recognizable trumpet of the brass instruments.  As that happened my whole gut squeezed and tumbled -- Holy Shit, is this going to be the WHOLE damn movie?!?!  Yep, I said that, and not in my head as I thought it was, but I said that out loud.  A couple of people behind me laughed and the SO was like, No!  It's just scenes from the movies, besides there are 6, that would take a whole weekend.

So once I got over my worst nightmare I was able to enjoy it a little more.  The setting consisted of a stage with the orchestra and a huge LED screen.  I think I read somewhere, this is the largest traveling LED screen. It was wicked cool and the images were crisp clear.  It was cool to see the members as they played. 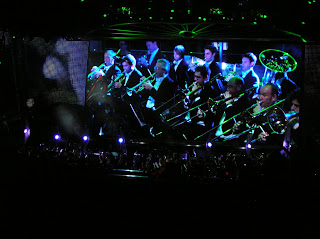 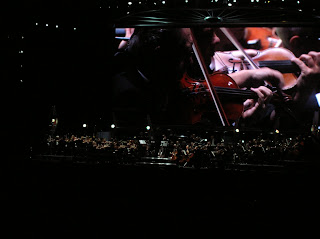 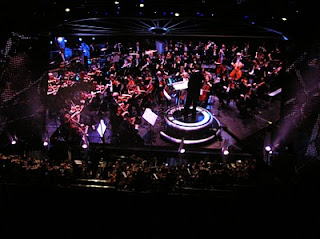 Unfortunately, that is the best picture I have of the maestro.  He (as was the rest of the symphony) was amazing.

And narrating: C3PO!  Well, Anthony Daniels, the man who voiced and characterized C3PO.  He was great, and very charming.  He is really a good actor, I would love to see him live in theatre! 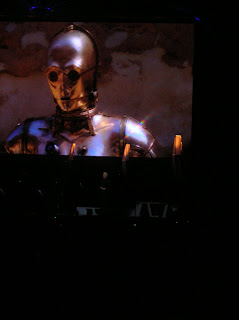 Here is a picture of him... big screen and itty bitty him on stage.... 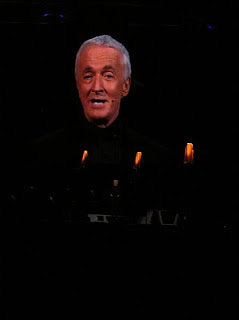 The concert was broken up into different themed sections.  Each section Anthony Daniels gave background on (for those of us who don't live, eat, breathe Star Wars) and the screen would show bits from the movies and still shots (such as pre-filming drawings) and the music.  Oh the music was lovely.  Even though I personally think these movies rely way too much on french horn and other brass instruments, yes i'm staring at you trumpet (i'm a fan of the strings section), one can totally appreciate live music synchronized with the movie and the lights show.

I was able to capture some screen shots.  I really wanted a nice pic of Han Solo -- I heart hunky Harrison Ford -- but he moved too quick for me and my cheap little camera. 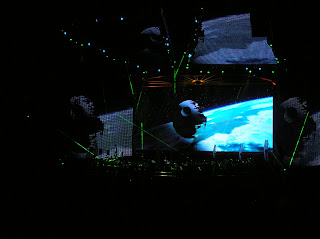 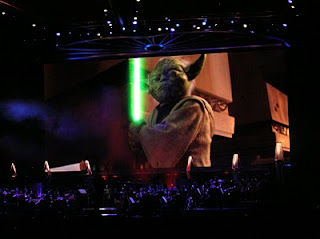 Oh and the character that the SO can't stand.  Actually I think he might hate this character.  Well I always joke around saying how much I love Jar-Jar (really I don't but it irks him so much!).  So here is a picture of that character the SO loves so much. 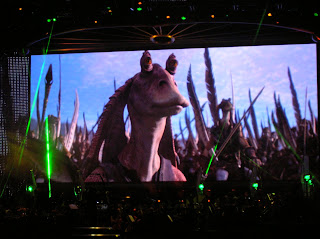 And my favorite image from the evening is this one -- it looks like we are IN the Millennium Falcon.  Kinda cool.  Overall, it was a nice evening and as long as the SO had fun, so did I. 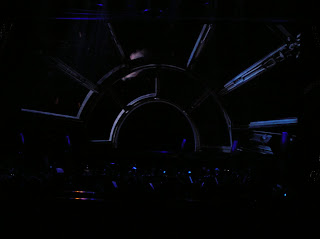 Lupie said…
Sounds like you had a great time. I love seeing live performances.
For my son-in-law the added Star Wars element would make it just the ticket.
December 26, 2009 at 6:47 AM

lunaticraft said…
Oh man, that makes my inner Star Wars geek squee just a little bit. Well, actually, a lot. haha (Although I must say for the record, I'm an original 3 fan. Did not like the new movies one bit. haha)
December 31, 2009 at 2:28 AM