Before I even start, I appologize for the typos and poor spelling.  I cannot figure out the spell check on the new Blogger... so until I do you get to find out how horrible I am at the whole spelling thing!

Not sure if I ever posted about the Halloween party the SO and I went to.  Last week we celebrated Kate's bday (again!) and used the party as an excuse to dress up.  How often do you get to see the future scientists of the United States hammered and dressed up in costume?! 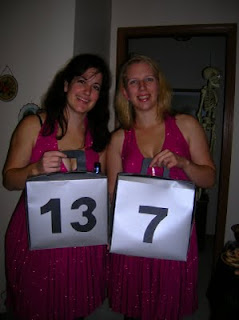 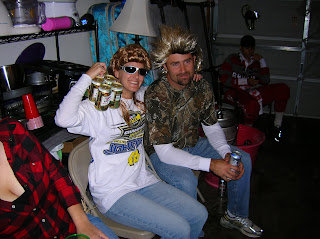 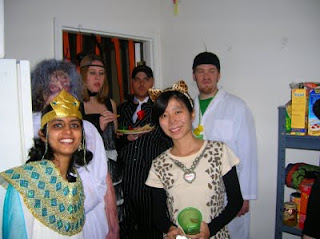 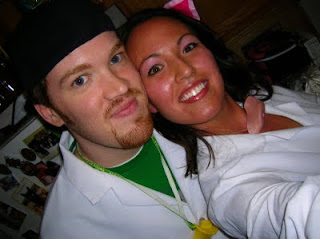 The SO and I went as Bird Flu and Pig Flu.  We don't have our stuff on here, but I had a piggy nose and the SO had a duck bill (from Baltimore Duck Tours so it quacks!).  I had a pig-tail and he had a tail-feather (although he wouldn't shake it when I told him to!).  It was a cheap costume - only $5.25 total.  I'll try to find a pic of us with our faces on and post it....

The SO and I had a great time in Brown County.  Unfortunately the leaves were no longer on the trees but on the ground.  However there was no rain and it was warm enough to wear long-sleeve & sweatshirt -- perfect Fall weather.  We bought a couple gifts for people, but nothing too major on the spending front.  But it is nice to support other local buisnesses (not local to us, but small mom & pop buisnesses rock!).

We also saw Lett and Kendell.  We haven't seen them since the wedding in July!  Remember that wedding we were in... yeah... way back then.  We seriously haven't seen the two since then!  So it was good to catch up with them and see their new house.  We even handed out candy with them as it was their neighborhood's Trick-or-Treat evening.  BTW -- don't want a kid, but OMG, there was the cutiest little penguin.  I wanted to take the penguin home and keep it.  So adorable!

And... guess what Lett and Kendell did.  They brought me some yarn from Italy!  They went to Italy (Venice specifically) for their honeymoon.  So jealous....

AND best of ALL!

They brought this back for me: 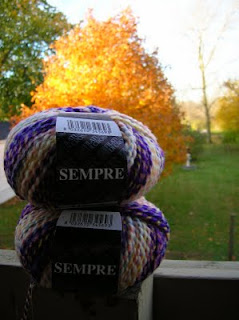 Isn't it beautiful!?!?!  I guess they were walking around (as you do in Venice) and stumbled by a store (as they put it) "FULL OF YARN."  Of course they saw it and thought of me and went in. Hehehe... I love them.  The lady in the Lellabella was nice and gave them this to bring back to me. 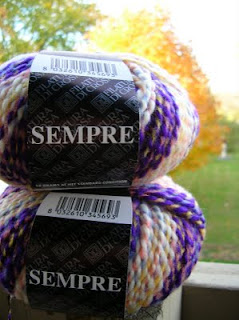 This is Sempre, a beautiful bulky weight wool and nylon blend from the Italian company, Filatura Di Crosa.  It is a heavy worsted with a contrasting ply twisted through it.  I'm not sure of the name of the colorway but I am sure I will love knitting with it! 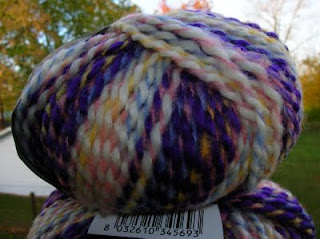 lunaticraft said…
Brilliant costume ideas. And the bit about the tailfeather and the refusal to shake it made me snort laughing. =D

Kristin said…
I always knew Lett and Kendell were good people! Had I realized how good their taste in yarn was though, I would have made better friends with Lett in college. Haha.
November 5, 2009 at 1:57 PM