Lots of Knitting Catching Up!

I missed Wandering Wednesday yesterday!  And despite my slacking... I really do hope you had a wonderful day.  I was actually a little frazzled.  I had a draft due on a paper yesterday and I started working on it Tuesday.  I usually hand shit in early, but I was late!  Well not really late, the final draft isn't due until Friday at midnight.  However this is part of a group project and I was the last to get my portion of the paper sent in!  No worries though, it was sent in and the currently we are editing and it is going great.  Homework for next week is already done for one class and half done for another.  So no stressing!  Oh, actually, next week I'll be a bit frazzled because I have an RO3 grant due (well I don't, but my boss does, so I have a couple of experiments to complete next week for the submission....eh).

As for knitting... well you can imagine I haven't done much because of the school work and the work work.  But I do have a couple quick updates:

My Kraemer Sterling Silk and Silver yarn started as this shawl (Ribbon Yarn Wrap), however after completing approximately 6 inches I decided the yarn didn't want to be this. 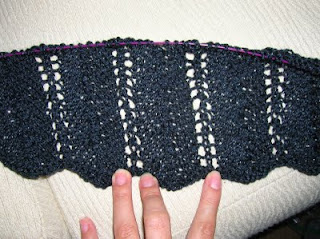 So I frogged.  Then I tried the Heartland Lace Shawl, a very lovely shawl.  But the yarn, pattern and I in combination were not cooperating.  I am LOOOOVING my Traveling Woman Shawl.  I seriously wear it at least once a week.  I am on such a shawl kick and I really want this yarn to be a cute shawl, so I now have this pattern, the Meandering Vines Shawl, on the needles.  Sorry for the blurry photo, the SO wasn't home to snap the pic so it's blurry, I'm holding the camera and shawl and trying to keep the bunny away from the yarn (he likes to chase the Sterling Silk and Silver ball around for some odd reason). 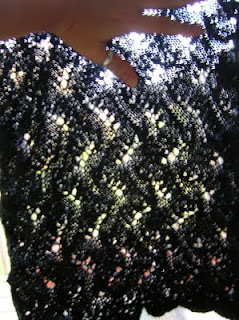 We'll see how it comes out.

A couple other things have happened this week:

We had a Suzy Betty Explosion: 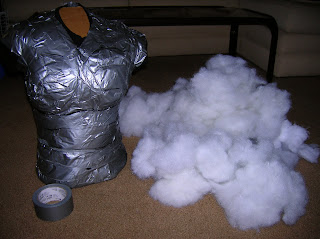 The back burst open and threw up the fluffy stuffing all over the floor.  I guess my betty was upset that it was so stuffed with fluff, as I did lose 20lbs during radiation.  Clearly, it too wanted to show its loss in bulk.  So a little surgery via Macgyver means (aka: more duct tape), and liposuction (or leaving out of fluff), and we now have a Suzy Betty approximate my new (or previous) weight.

And lastly we have this cheap n' plain ole sock.  Yep just one.  I bought some cheap yarn, Red Heart (yes I bought Red Heart), Heart and Sole.  The sock yarn stuff.  It feels cheap.  It hurts my hands when I knit because it is so stiff and blah.  I did a vanilla sock pattern toe-up with an anatomically correct toe and a proper gusset.  However, I loooove the pattern stripes.  This is in colorway Toasted Almond.  Very cute.  But it will be a singular sock as I have no desire to put my hands through the torture of knitting a second one. 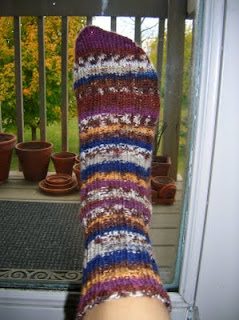 I am going to Brown County with the SO this weekend so I'll probably get some knitting time in during the drive.  I'll post those pics (from BC and the knitting) when I return.  Have a great weekend!
Email Post
Labels: dress form Meandering Vines Red Heart sock Sterling Silk and Silver

Lupie said…
I love the Meandering Vines Shawl and hope it works out I would love to see it finished.
One sock! Ok now you have to make another sock out of some other yarn you like a little better and wear them in the house.
October 30, 2009 at 3:57 AM