So yesterday was a bit of a sour post so I'll try to make things up today. I worked on a different type of project last weekend instead of my knitting and I thought you'd want to see!
I have always wanted a dress form so I might attempt to re-alter some of my old clothes. Unfortunately the dress forms in stores cost too much for my itty-bitty research tech budget. So after perusing the wonders of Google I found this site that describes how to make your own betty dress form! All it takes is an old, oversized shirt, duct tape, scissors and a good friend. After skimming the directions I grabbed the SO and told him to tape me up! 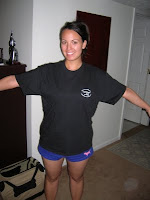 After he stopped giving me the "You are F'ing crazy" look, he happily duct taped me up. Not not in that odd sexual way, but in the "I get to tape her up and she can't move" sort of way. And after a short while we had this: 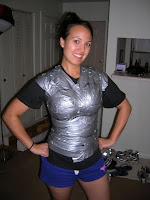 BTW -- that's my Wonder Woman/Suzy cheerleader pose from back in the day.
After we finished the taping the SO ****carefully**** made a cut along the back, from bottom to top. Once we got me out of the thing we re-taped the cut and I started stuffing the bitch. Do you know how much stuffing goes in there?!?! Did NOT make me feel too good about the whole body image thing. Of course, I ran out of the batting stuffing stuff. But a quick trip to the big box craft place the next day let me finish my betty dress form. 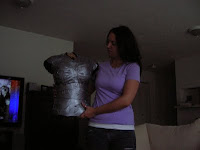 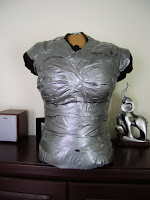 I think the tape accentuates my boob-age area... trust me I'm not that well endowed in that area. It might be how the SO taped that area... not quite sure. But it actually is a pretty good representation of my figure. I think I'm quite pleased with the results. So if you want a dress form I highly suggest trying it out. It doesn't cost much and it's quick and easy!
FYI: I should tell you to NOT leave the dress form in a dark room on top of something that makes it human height. It might scare the be-jeaves out of you if you forget it is in there. Not that I would know from the terrifying experience... ! Just wanted to put that out there as a precaution! :)
Email Post
Labels: dress form

Kristin said…
I've been thinking about making one of these. I will probably ask a friend to do it though, because I'm sure I will have the same bust issue as you did if I asked my husband to help.
September 1, 2009 at 1:21 PM

lara griffiths said…
brave girl. the me form in duct tape would be ever such an ugly site and you look fab... a little on the metallic side...
September 7, 2009 at 6:13 PM