First things first... I survived my first day at the new school! Thank you for all the good wishes and positive karma. Everything went well during Orientation yesterday. And I did NOT get lost in Indy. Nor did I get lost on campus (yes I was one of those new students holding a map and walking around turning the map around and around trying to orient myself). How many times can one feel like a first-year student on a campus? If I ever decided to go for yet ANOTHER Master's, remind me of feeling like a freshman again, hopefully that will stop my insane need for advanced degrees.
So yeah, I didn't get lost!
But.
I did get lost on the drive back.
No not in Indy.
No not even after the hour long drive on the interstate or on the 30min drive on the county road next to cornfields (thank goodness! Cornfields are scary!).
Nope, I got lost about 5 minutes from my apartment.
How that happens, who knows. I took a wrong turn and I got all mixed up and had to circle around Purdue campus and go home the long way. Lets just say, I just took a nice extra 25minute drive around campus. Eh... and the new students were everywhere! Eh... 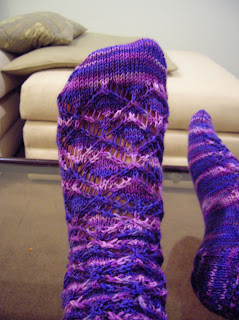 Pattern: Devon, by the amazing Ms. Cookie A., from her new book, Sock Innovations

If you like to knit thought provoking socks, you need this book. It has many amazing sock patterns. I love so many of them but I think they are mostly beyond my capabilities. I eventually will knock through a bunch of these babies, but it'll be a while. I actually chose this particular pattern because it appeared to be one of the more simple patterns. Basically, I was thinking I'd ease my way into the Cookie A style.

I'm not sure why I had such a difficult time with the first sock. Well I know one thing. This lace pattern is pattern every row. I've only done lace patterns where you follow one row in pattern and the next row is knit (in the round or purl then knit a row each in flat). So I think that threw me a bit initially because it was like I had no break. And if I put the sock down I really had to know where I was, it wasn't like picking it up to a knit row. 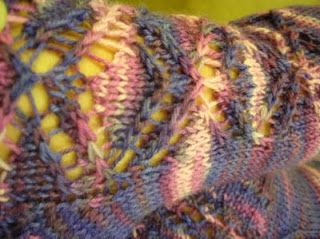 Obviously I figured it out because even though the first sock took forever, the second sock was a breeze.

No major mods on this project. Oh, I did make anatomically correct toes! Which, of course, was pretty exciting. First time doing that and it really does make a difference when you wear them. Excuse the hairy legs in the photo, now that the SO and I are engaged, I am calling a shave only when absolutely necessary rule. TMI for you? Probably! ;) 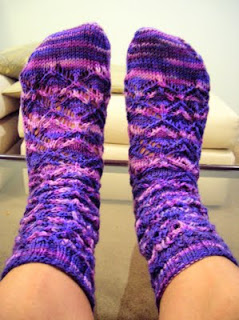 It was fun to go back to top down as I've done so many toe-ups lately, I forgot what it was like to turn a heel and knit a gusset! Although, I finally figured out how to knit a gusset on a toe-up, thank you Wendy Johnson, but that story will be for another time.

And last but not least. Do I even have to say it? I heart Lorna's Laces so much. I mean the yarn is great to work with. The yarn wears well (for me, I know some people have had issues, but all my socks wear and wash just fine). And the colors! Oh! I'm a big fan of purples and I love, love, love this colorway. I have another skein in the stash that I am just going to hoard and take out occasionally to look at and squeeze. Is that sick and/or bad? 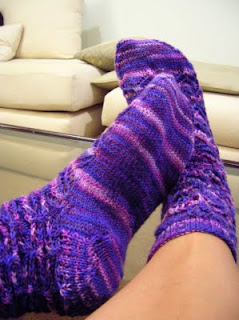 Melissa Morgan-Oakes said…
What could possibly be more thrilling than a western blot and a pcr?!?!

Zel, The Grimm Witch said…
The socks look just wonderful!!!! I'm going to check that book out. Congrats on your 1st day. You're not nuts for going for MA2. I think it's a great idea and wil leave you with so many more options. 'I give myself very good advice, but I very seldom follow it.'
August 27, 2009 at 1:20 PM

Sigrun said…
I also have the book, and i want to start all of them. I even ordered yarn for all of them. I'm attracted to the ones that look the most complicated. The one hitch: i can't get used to the idea of only 60-something stitches. I match her gauge in st. st., but my socks always have 72+- sts. But I'm busy with other stuff anyways. Congratulations on the engagement--maybe it's old news, but it's news to me. Your telling about the campus makes me want to go c\back to school, too. I graduated from my first degree in 1978, then got my next by distance education. I have entertained the thought of another distance ed. course just for the fun of it (I'm 63), like European History or something. DE is more practical since I live 70 miles from the nearest campus.
August 27, 2009 at 9:20 PM

lizzzknits said…
The socks look great and were worth the effort. Good luck in school. In my freshman year, I accidentally walked into a senior level philosophy class having written down the wrong room number....this was 1968 and I looked like I was about 12 at the time and all the students looked about 30!!. It won't take long to learn your way around.
August 29, 2009 at 11:47 PM

Lupie said…
The socks are amazing and the yarn just beautiful. Thanks for giving my daughter the idea for getting this book because I may get some more socks!
August 30, 2009 at 4:28 AM

Steffi said…
Ahhhh, I love feeling like the newest student on campus. So exhilirating, right? Oh, well, it can't last too long.