On Sunday, my peep Kate and I drove up to Chicago to the Museum of Science and Industry to see the Harry Potter Exhibition!!! ...Oh, and as an FYI, beware of flocks of suicidal birds in Indiana. On our way up to Chicago a flock of birds, lead by the Jim Jones of birds, flew INTO the grille of the car, one even flew up and ricocheted off the windshield as it flew over the hood. It sounded like a bunch of beanbags getting pummeled into the car. I think I will forever be afraid of birds swooping down near me.

Anyways, after our scare with Hitchcock's Birds, we made it to Chicago and The Exhibit!


The exhibit was wicked cool! If you are a fan of the Harry Potter books &/or movies you must see the exhibit! It had props from the movies as well as some sneak peaks at some of the props used in the upcoming Half-Blood Prince movie. So, so cool! Only crappy thing... a little thing called copyright laws. We couldn't take pictures in the exhibit. I did get one item on the digital... The Flying Ford! 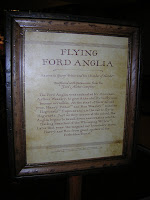 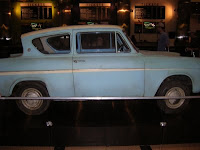 However, because of the awesome powers of Google Images, I have found some pics of the exhibition of the things we saw: 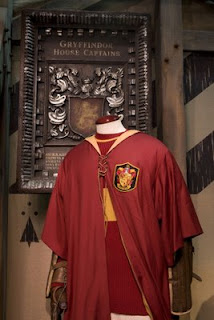 Other Quidditch uniforms worn in films (from http://www.sugarcoveredquills.org/). 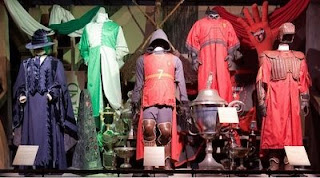 We saw upcoming movie props and outfits, such as Professor Slughorns outfit (http://www.todaytrend.net/): 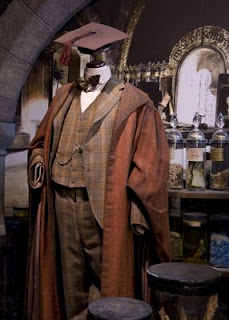 In addition to props and costumes, they had a couple interactive areas. We walked into Hargrids Hut and sat in Hagrid's chair. In the another area that had information about Quidditch we tossed Quaffles through the three hoops (with the scoring sounds with you hit the mark!). And in the Herbology area we "uprooted" Mandrake roots. There was so much stuff! I can't even tell you everything that we saw. Have I mentioned it was cool? :)

And the WICKED cool part... The hand knitted gear! So many items were hand knitted! Unfortunately I cannot find any pictures on Google (don't worry, I'll keep looking). But seriously, Ron's sweaters, Professor Trelawney socks and many more things! Ooh, and beanie hats! Kate was getting annoyed at me pointing out all of the knitted garments... but for real! It was cool (again, have I mentioned that?!) .

Funny story, we were (of course) some of the first people to enter the exhibit, the only people in front of us were an older couple. However, before entering into the actual exhibit we had to wait in a room for the rest of the group to get "Sorted" before entering. As we were standing there waiting, the guy leans over to his wife and points to the Sorting Hat and says "What is that thing?" Kate, (let me remind you we are less than 2 feet from the couple and the only other people in the room) goes "OHMYGOD! He doesn't even know what it is!!!!" Yep, embarrassing.

But it's okay because there was more embarrassment throughout the day. At one point we came up to a huge arch and simultaneously we grabbed each other and started shrieking "It's the GREAT HALL!!!!" The people around us just looked at us and just shook their heads. So yeah, between that and the shrieking and giggling like two little school girls... good times. Good thing the SO wasn't with us (although I have a story for you about that one... Once he writes it, I'll link you to his blog so you can read the story).

I didn't spend too much money (good thing too because the SO went crazy while I was out of the state. Again, I will direct you to his blog post so you can scold him. He deserves it). Kate and I wanted to purchase a Nimbus 2000 (or 2001 which ever would have made me happy). Then we wanted wands. Then we wanted Time-turner necklaces. Well we finally decided on matching Gryffindor House ties. It looks kinda hot with a tiny tanktop. Or it looks great tied in your hair like a headband (all the girls working in the exhibition, one had great British accents, and two had the ties in their hair... too cute!). OR it looks wicked cute tied like a belt! See multi-purpose purchase! :) 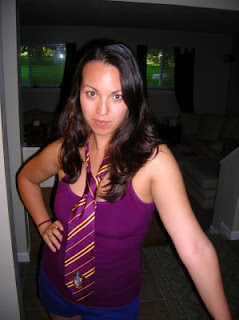 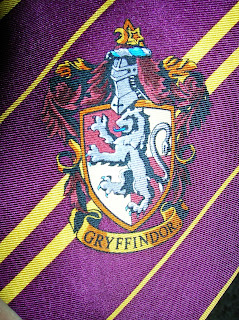 Zel, The Grimm Witch said…
I N V U!!:) What a fun outing. I love that the pieces I see on screen and wonder about may actually be hand knit! Love the tie! My geeky teacher dream is to one year organize all my homeroom students to wear black, knit up some quick Hogwarts colored scarves, and be a Hogwarts homeroom.
June 25, 2009 at 5:18 PM