I don't remember if I ever wrote about the Mother's Day event that I took part in.
A while back CODEPINK Women for Peace had a protest against the war planned for Mothers Day that involved knitting. They wanted to get pink and green knitted swatches to create a cozy to cover the fence in front of the White House that said "We will not raise our children to kill another mother's child."
The template (I googled and found this image of their template here): 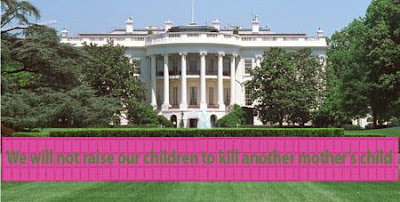 I saw this call out for swatches, so I knit a swatch for me as well as one in honor of my mum. The second link for CODEPINK has a bunch of videos and pictures of the actual cozy getting sewn toghter as well as being put up in front of the White House on Mother's Day.
I used some acrylic yarn that I found in the back of the closet for both 4"x4" swatches. One was a basic basket weave type of stitch pattern. The other was a simple eyelet pattern. Both patterns were found in 200 Knitted Blocks (Ravelry link). 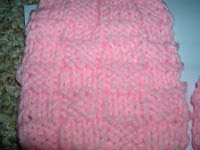 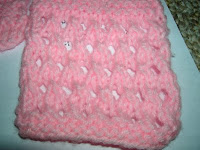 So I am very against the war (sorry to bring politics into this blog... I try to keep it from swaying that way), but I don't agree with EVERYTHING that this group does. However, I thought this project was a meaningful on an important day. So I was glad to contribute my 2 little swatches to a day with a loud voice and big meaning. 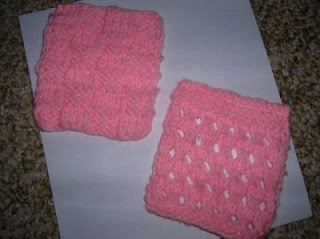 Megan said…
I knit some squares too. I was worried about how organized they were- were they going to get enough squares? have enough people to seam them? etc. But I have to say they did a great job and it looked great in the end. They posted pictures on their website of the finished cozy, I don't know if you saw them.
June 26, 2009 at 10:42 AM

Zel, The Grimm Witch said…
I was going to type that I'd seen a post about this on Knitting Like It's my Job too:) You guys rock for taking part...and the pics the organization posted on flickr are awesome.
June 26, 2009 at 12:14 PM