A day in which yarn and Joe Lunardi both excite me

On Friday I bounced from work for about a 1/2 hour so I could meander down to River Knits!

I know! In between doing dissections, plating neurons, running pcrs and gels, I actually found time to drive down to Main Street (you know 5 mins away) and actually look at yarn! It was great! I should do that more often! :)

After looking around for a bit, I purchased Daria Multi, by Noro. Super shiny! I like shiny....

On Saturday I purchased some toggle clasps from Hobby Lobby.


And today I sat down for about a half hour and did the i-cord just as Vegan Craftastic suggests you should and this was made: 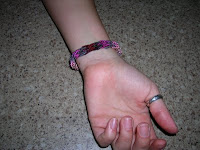 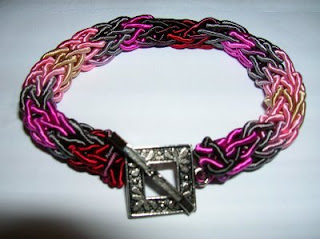 And last but of course not least....

Back in 2006 (waaay back then) the SO and I were able to spend Final Four weekend down in Indy. We didn't actually attend any games, but dudes I can tell you that we had FUN! And because tonight is the NIGHT when they announce who is dancing I have to put up the picture: 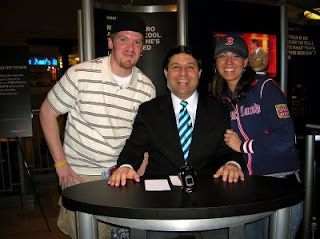 For those who don't know, NCAA basketball tournament starts this week. Joe Lunardi is THE MAN. He is THE Bracketologist. Anyone that can turn something such as predicting basketball standings and statistics into a fun science is the bomb. Not to mention last year he predicted 63 of 63 of the teams what would go dancing. This picture is of the SO and me with Joe. Have I mentioned that I heart Joe?

BTW, if you don't hear from me this week or next week it's because I am a puddle of muck in front of a tv or at a bar, from an overload of basketball. I'll have my knitting with me but my gauge goes wonky as the game gets more tense so we'll see how much knitting (or science experiments at work!) actually gets done in the next few weeks!
Email Post
Labels: Daria bracelet Joe Lunardi Noro

lunaticraft said…
Beautiful bracelet. Do you have a specific team you're rooting for?
March 16, 2009 at 2:42 PM