Home for the Holidays (HftH) - Recap 3

Good times. Crazy times.
Holiday/gift exchange time with my family is always crazy and loud. Initially, I was worried how the SO was going to handle it. But I have to tell ya, I am proud of him because he was able to go with the flow. I really need to not worry so much! Best thing of all, my bro and his SO (now named BroSO) came over for Holiday dinner.
There is a whole ritual that goes with gift opening at my house. Basically when it is time for gift opening, you have to be ready. Someone stands near the tree, yells out the name and hands out the gifts. That's when the gifts start flying out from under the tree. As the "caller" is yelling out names, you either have to duck if it's not your name, or if you hear your name you have to get ready to catch it. And you're not done there. There is a schizo-like scramble to quickly open your gift and show everyone or you'll get your spotlight moment taken from you because then next gift has to be given out. This whole process would take the normal family 1-2 hours. For our very abnormal (but loving) family, it takes about 15 minutes. After the gifts are handed out, THEN you are allowed to look at stuff and pass things around to oohh and ahhh and play.
I am happy to report that Mum loved her socks. And she was very surprised because they actually fit her. BroSO was also happy with her socks. When I hear from them, I'll report what they think after the first wearing!
The SO and I were the lucky recipients of the gag gift this year. Actually I didn't realize we had this tradition. I think my bro and BroSO just started this. All I can say: Game On! The SO and I received these odd blow up, squeaking penguins. They are actually kinda cute. Fun thing: we can bop each other over the heads with the blow up penguins. And FYI: Kyle is afraid of them, don't ask how we found out. 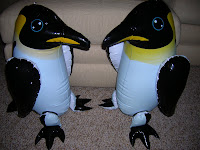 After an amazing dinner (both of the rents are AWESOME at cooking), we went outside and made a bonfire. 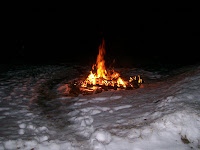 Okay. So Daddy made and tended to the fire. We toasted marshmallows and made smores. Mum made the strawberry daiquiri. 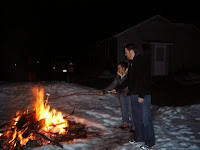 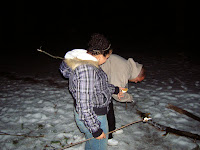 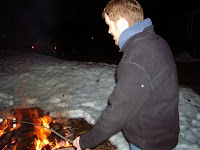 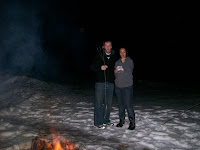 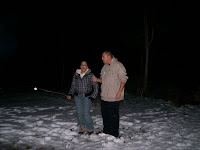 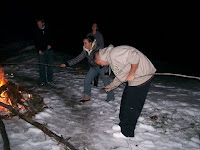 When the fire was big and warm we edged our chairs farther away. 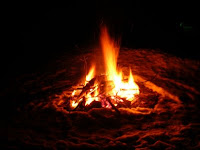 As it started to die down we inched closer and closer to the fire. 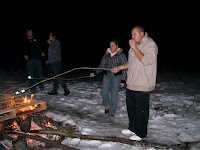 We threw snowballs at the trees. Distant trees that were hit were given more props. The SO and Bro had a blast trying to hit the farther ones. BroSO and I had a blast toasting the marshmallows. I had a Super Flip-the-Bitch method of toasting. I turned the toasting of marshmallows into a scientific endeavour with a protocol for the ultimate toasted marshmallow. Go figure... 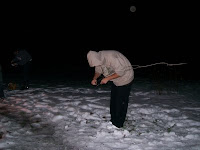 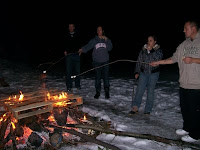 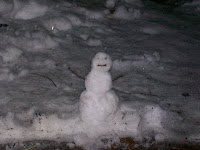 Until he stomped on it.
I took the absolute scariest picture ever. I was trying to take a close up of the flames and ended up taking this picture. It seriously looks like a face in the flames. I didn't' realize it until I uploaded all of my pictures from my camera. The SO says it's because I'm the devil's child (sorry Mum, not you). Initially it wicked freaked me out. Now I think it's kinda cool. But I'm odd like that. I'll keep the picture of my dark angel. Now I just need that picture of a UFO (not my knitting UFO... I have plenty of those) and my conspiracy theory dreams will be full filled. (I do hope all of you can see my sarcasm there...). :) 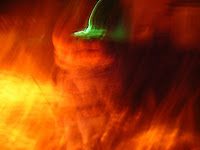 Overall, we had a blast that evening. Most of all, Mum and Dad were happy because the whole family was home and were having fun. It was an awesome day.
Email Post
Labels: bonfire family gifts NH